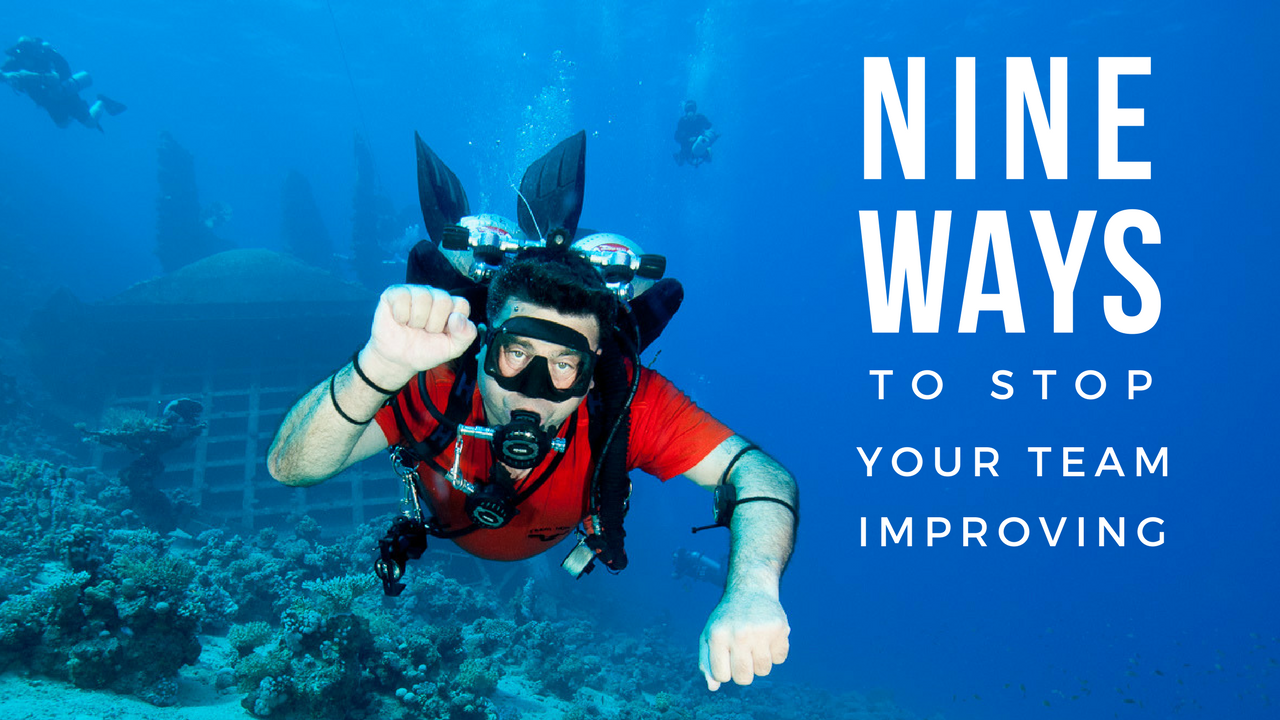 Divers make mistakes they don’t talk about, especially given the adversarial culture which is present in the diving industry. However, they are often acting on partial information because they don’t want to ask dumb questions, and they are hiding the things that aren’t going well because they don't want to be humiliated or they don’t want to be the person who thumbs the dive because it will let the others down. As an example of this, of the people on my webinar last night, more than 75% recounted an issue where the dive didn't go to plan because they were unable to speak up and either thumb it, or not get in the water to start with. Inability to communicate due to real or inferred peer pressure is a massive issue when it comes to safety and performance.

Unfortunately, despite the mantra, "anyone can thumb the diver for any reason at any time." actually doing so is much harder than we think.

It is hard to judge the result of divers not being able to speak up when needed due to the lack of quality incident reporting (which in itself is caused by an inability to speak up), but as an example of the scale of the problem, the health industry in the US estimates spending over $71.5 B on medical errors in 2008, with at least 58% of nurses in one study saying that they are afraid or uncomfortable about questioning doctors.

Furthermore, reports showed that many people knew about the problems on the Macondo Well project in 2010 (Deep Water Horizon), we could make informed judgments about the cost of not speaking up and not listening in that situation.

Sidney Dekker, author of Just Culture: Restoring Trust and Accountability, just delivered a keynote (2017) to a large audience of software developers who wanted to learn how to stop people from hiding their coding mistakes.

How can we go about changing our behavior so that we create an environment of trust and open communication?

I spent some time this weekend at the BOOT show with Hans Kaspersetz, President and Chief Strategist of Arteric, an innovative and world-leading software company working in high-risk domains, and he talks to this very point.

How can we go about changing our behavior so that we create an environment of trust and open communication?

A leader's reaction to mistakes or misunderstandings is critical to keeping the lines of communication open. A leader doesn't have to be the most senior person, but the most senior will certainly have an influence over how discussions about mistakes, errors and violations will pan out.

However, there are many ways in which communication is hampered by common behaviours and reactions. As such, we need to recognise them and reduce the barriers to effective communication.

Here is a list of the top nine that I have observed over time within teams during my professional life but also during training I have delivered. Some of these apply more at the organisational level than at the dive team level, but they are all applicable to both 'dive life' and 'non-diving life.'

Self-awareness is key here and something I often see lacking. The reason self-awareness is important is that we have to be willing to be aware of the impact we are having on others - something I suffer from when I talk about human performance and human error! However, if you are thinking about taking some personal responsibility, it indicates a level of self-awareness.

There are practices and skills to maintain open communication like ask questions before you judge a situation, solicit feedback on a regular basis to find out how you are impacting people, ask people for their understanding of your communications, or end assertive statements by asking for other points of view.

However, to use these skills successfully there needs to be a sense of humility, curiosity, and a real willingness to be vulnerable. This is really hard in a sport built on egos and drive!

These traits aren’t part of any diving course curriculum (as far as I know), so inevitably divers have to pursue them on their own. It is for this reason that I deliver my courses in the way I do - I teach people to be vulnerable and fail in a safe environment and provide critical feedback to others. If there is a want to get better, continue on the journey towards excellence, we first have to self-realise where our weak spots are, and then we have to change our lens of perception from blame to learning, to view the world differently.

People don't like to be wrong, especially those who display Thinker or Persister traits. That does mean you don't have to know your 'technical stuff', but if you want to treat people with respect, it requires trust, self-confidence and self-esteem. To that end when someone provides you with feedback, the response isn't "Yes, but..." or "No, but..." Rather, what you should do is thank them for their feedback and reflect on it. If you go into defensive mode, you will likely fail to learn.

The research and practice show that highly effective teams recognise that open and frank communications are essential for high performance, and with high performance comes improved safety and the ability to manage risks more effectively. Keep the channels open. You can control your side of the communication, and as long as there isn't conflict, the other side should stay open too.

The Human Factors Academy provides globally-unique classes to improve human performance and reduce the likelihood of human error occurring in the diving domain. We operate in other domains too, like Oil and Gas and Healthcare