Why is it so hard to thumb a dive, or end something that you have committed to? 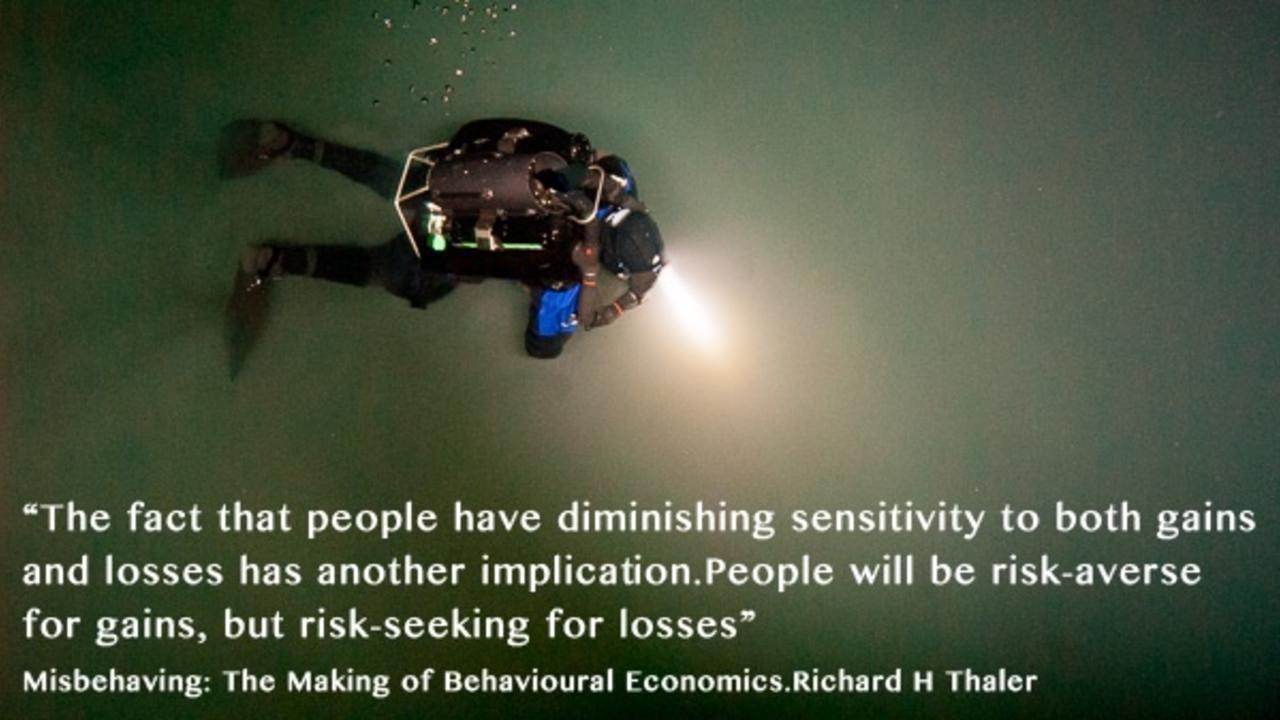 One of the key messages given to divers all through their training is that anyone can thumb (end) the dive at any time for any reason and no questions will be asked.  However, those who have been in a such a situation, it isn't easy.

"There were four of us diving on the wreck which lay in 48m. We knew the visibility wasn't going to be great so decided to swim as two close pairs, rather than the loose four we normally did. As we hit the wreck we realised it was bad so stayed close to the side of the hull at the highest point (wreck lies on its side). After quite a few minutes thinking this was bad we all turned to each other, pretty much at the same time, and thumbed the dive. On the boat we discussed that as we had got to the wreck that this was going to be a rubbish dive and we should thumb it. But no-one wanted to."

In-group vs out-group inferred peer pressures. One of the factors contibuting to this decision-making was in-group pressure. No-one likes to be different.  We often talk about peer-pressure being brought to bear on divers to carry on when they shouldn't have done, and many say that when someone is taken beyond their comfort and capability zones, they were pressured into doing it, infering that there was some sort of verbal communication to make it happen. Yet much of the peer pressure isn't active, but rather it is inferred peer pressure to want to be part of the in-group. This effect isn't just limited to close groups with direct visbility, Paletz showed that it happens in aviation too where pilots in Alaska would make decisions based on whether previous aircraft had been able to land in poor weather.

Importantly, in this context, losing doesn't mean that you have actually lost something, but the threat of losing it is enough to take further risks.

Consider that you have had the last 3 weekends of diving blown out and this weekend you are going to be diving a wreck that you've been waiting to dive all year. It is also the last dive you have planned for a month because of work and family commitments. The weather is marginal with a large swell but the visibility on the wreck the day before was reportedly amazing. You haven't had much sleep as you had to get up early to drive down to the harbour and so feeling very tired. You meet up with the rest of the divers and that realise one of the team who was going to make up your team of three hasn't been able to make it and you are now all paired up. You and your teammate don't know anyone else on the boat. On the way out to the wreck the weather doesn't pick up and so you are bouncing around, not feeling well. The skipper fails to shot/hook the site on the first two passes and the time before the current will pick up is getting less. You are getting more uncomfortable but you know that if you thumb the dive before you get in, your buddy will be unable to dive too. It is your team's turn to leave the boat and whilst walking over, you fall and bang your knee. You get up, walk to the gate and jump off, but in a lot of pain.

As you enter the water you see that the visibility is in excess of 15m and as you descend you start to see the wreck in its entirity. As you reach the wreck your leg starts to really hurt and you are struggling to fin comfortably. You push the pain away because you are having an amazing dive but you would really like to end the dive...eventually you reach the pressure agreed to end the dive and you start your ascent. Your leg is really hurting now and you realise you are going to have to get back on the boat in the swell...to get back on the boat you have to dekit because you cannot stand on the lift and in the process your expensive dive computer gets lost along with your steel reel and dSMB.

In your own mind how far would you have taken the dive before thumbing it? Before you got in? Immediately on entry once you realised you would have to get back on the boat? Once the pain started to pick up?

There are a number of factors which all contributed to you making a decision, which in hindsight, wasn't necessarily the best one.

Those of you reading this and thinking you would do something differently, there is significant research by Kanheman, Tversky and Thaler that shows these behaviours cover mutliple domains and experiences and that in the main we behave the same way.

Interestingly, Kahneman showed that the scale of gain to overcome a loss needs to be in the order of two times. Therefore we have to perceive that the benefit is twice the loss before we will change, which is very difficult when we don't know how bad it could be. Furthermore, how do you perceive a benefit to an intangible like feeling good or bad after a dive?

So what can we do about it?

Recognising that when we are in a "losing situation" we are likely to take more risks and raise our awareness as a consequence.

When we are tired, we will look to make an 'easy' decision rather than break it down into logical steps.

Briefings are a great way of 'drawing lines in the sand' which means deviation is easier to spot and improves the ability to be assertive.

If you are diving in a structured setup, occasionally have the leader thumb the dive and explain why they did so. If the leadership figures have demonstrated that it is ok to "accept the loss", then others will follow because of in-group inferred peer-pressure.

Debrief after the dive to see whether the decisions made by an individual or group were compromised, and determine if it is possible to recognise the signs and symptoms of distress. e.g. people looking around and waiting for someone to make a decision. It is only by feedback can we improve. Furthermore, others may have seen something you missed which improves your situational awareness.