Being a deviant is normal... 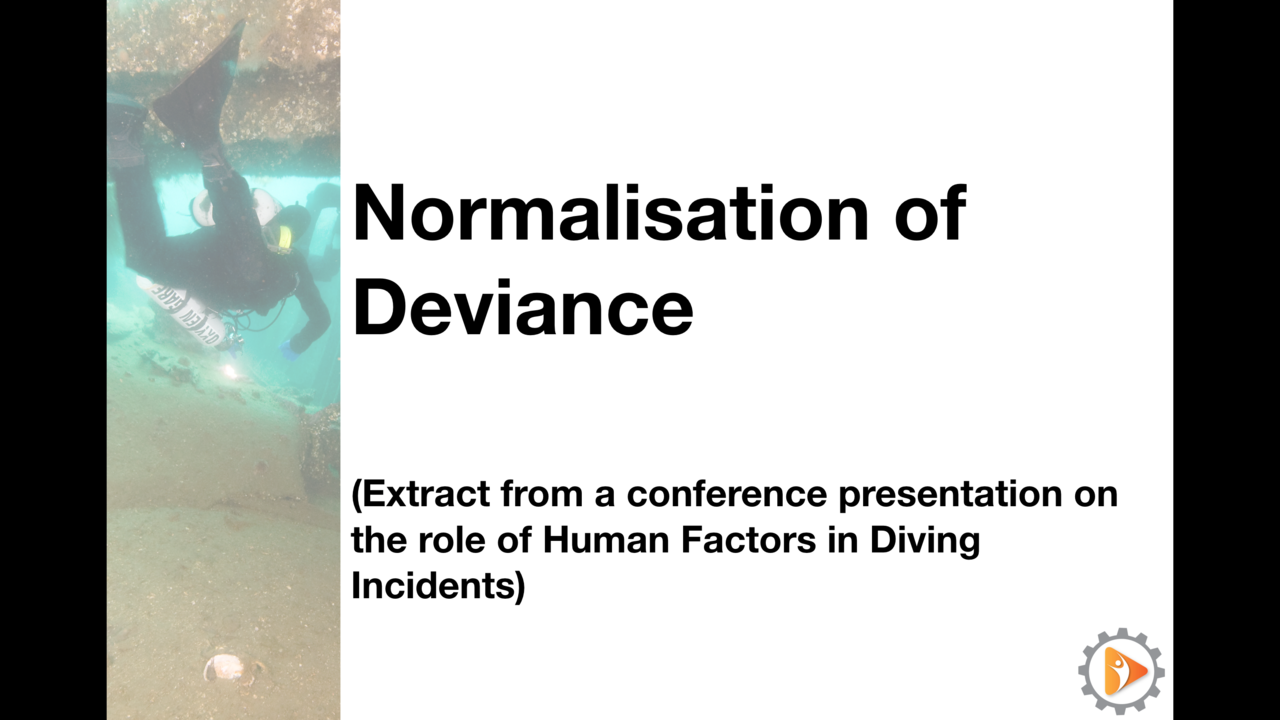 Normalisation of Deviance’ is a term which has become more popular in diving environments with articles being written by well known individuals such as Steve Lewis and Andy Davis explaining the context in terms of diving accidents in the US and Dr Guy Garman’s fatal attempt for a world record OC dive respectively.

The video clip below is a modification of a presentation I have previously given and combined two concepts looking at drift. The first concept is about systemic migration to the boundaries, a concept from Amalberti’s 2001 paper on “The paradoxes of almost totally safe transportation systems”. In it he showed that internal and external pressures drive operator behaviour towards potentially unsafe or adverse events. The diagram below shows this in more detail. It also identifies that more rules are unlikely to change behaviours. 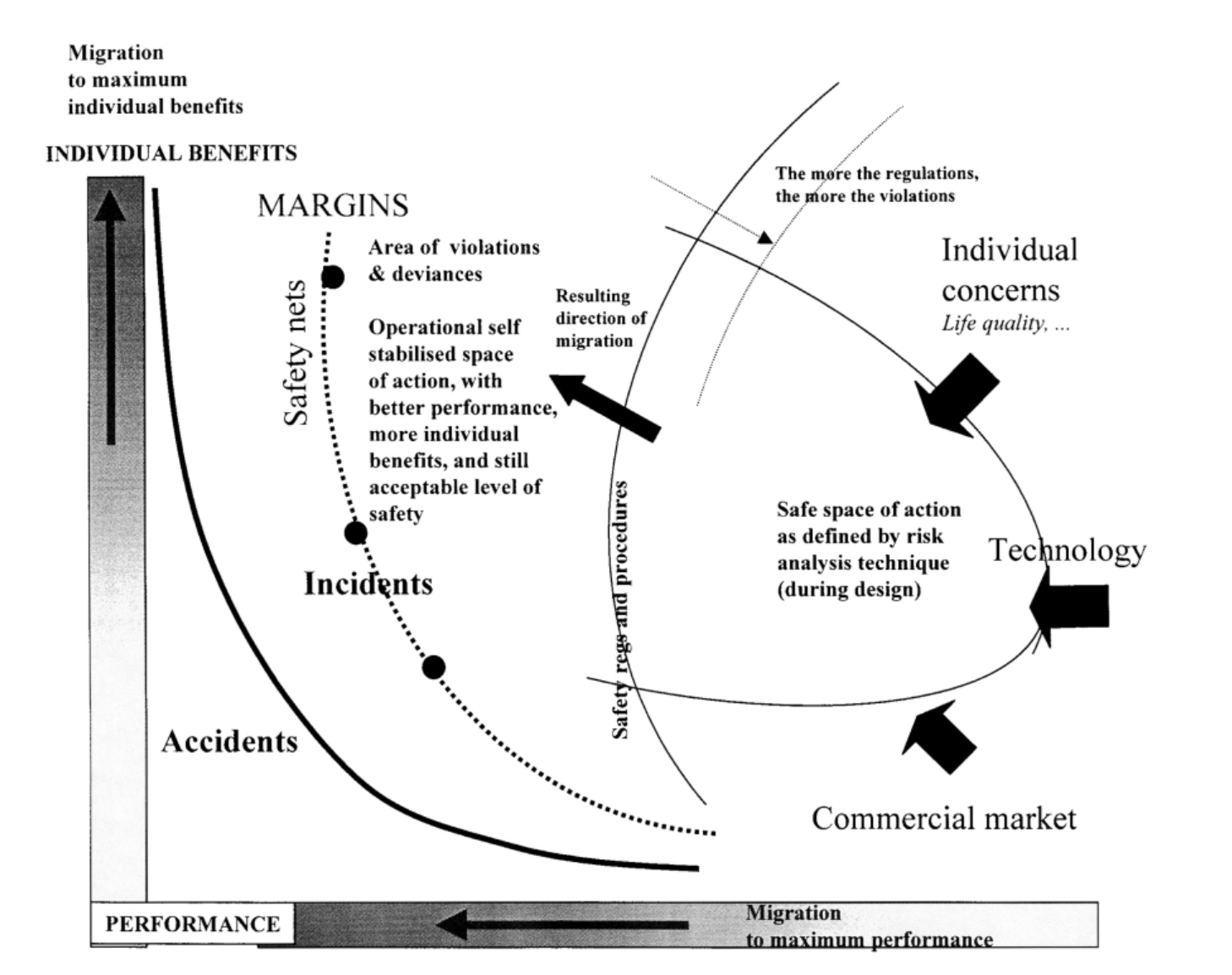 In another paper by Amalberti, this time on violations and migrations in healthcare, he and his authors wrote:

“The Rasmussen/Amalberti framework attempts to integrate the various perspectives on violations and to resolve some of the apparent contradictions between them. Rasmussen emphasised that front line workers do not follow procedures in a strict and logical manner, but try to follow the path that seems most useful and productive at the time. Workers operate within an envelope of possible actions which is influenced all the time by wider organizational and social forces. Rasmussen also described the pressures on individuals and systems to move towards the boundaries of safe operation, as workers are constantly having to adapt and react to pressures for increased performance and productivity which erode the margins of safety. Furthermore, these violations can become more frequent and more severe over time so that the whole system “migrates” to the boundaries of safety until an accident or recalibration occurs which forces a realignment. These external pressures, coupled with individual rewards and benefits, may over time modify the work being carried out, lead to rules and recommendations being progressively ignored, and eventually greatly increase the possibility of disaster as the organization becomes accustomed to operating at the margins of safety.”

highlighting that workers (or in the our context, divers) are trying to do their best given the physical and mental pressures they are under.

In the video I use an easily recognisable example, that of speeding. If the posted speed is 70mph, then a proportion of the population (probably small!) will stick to that, another proportion will drive up to 80mph, and some even higher and some will end up having an accident due to higher speeds. A driver who is recently qualified will likely limit their speed to the posted limit, but over time, and as long as nothing adverse happens, this will gradually increase until a certain threshold is reached. This threshold will be dependent on the individual’s risk appetite and the environment in which they are driving. Some may limit it at a lower threshold e.g. 70mph and never exceed because they have a safety bias and don’t want to have an accident, whereas others will do it because they have a compliance attitude and don’t want to get a speeding ticket.

Such drift happens in diving. Gas analysis, pre-dive checks, servicing of equipment, taking mental or physical shortcuts when undertaking a task… Again, the drift normally reaches a threshold and will be down to risk perception and appetite. If the credible risks are not known or recognised, then greater levels of deviation are expected.

The second concept in the video is from Cook’s paper entitled ‘Going Solid’ in which he describes how High Reliability Organisations are able to operate closer to the risk / failure line because they have less deviation in their operations. They have a clearer understanding of the risks involved and are doing what they can to minimise the likelihood of the risk materialising (or rather the contributory factors leading to the risk materialising).

If we now look at our own diving, how do we minimise this drift? Drift which is normal by the way. Some call it complacency, which in its technical sense, yes it is. (See this article for more on Complacency) If nothing goes wrong, is it just efficient?!

To minimise the drift, those involved in the activity need to know where the baseline is which means there needs to be some form of explicit or active communication, otherwise it is an assumption being made. In effect, defining what is the speed limit. If there isn’t this definition, how do you know how far you have drifted from ‘safety’.

Next, we need to have the confidence to speak up. We need to have effective assertion skills. In addition, we need to create the social environment where it is considered normal to speak up, and that if someone does speak up, they are not berated for doing so. This time they may have saved your life…next time they might not speak up and you miss a crucial point.

If you are in a supervisory or leadership role, then demonstrating baseline behaviour is essential. That includes when ‘fun diving’. If you teach something different to how you dive, what is the reason? Is it because you don’t believe in the rules from the organisation, or because you want to take more risks in your own diving. The difficulty from a external perspective is that an observer doesn’t know what has or hasn’t been done and therefore inexperienced observers are likely to copy this ‘deviant’ behaviour.

Normalisation of deviance is normal. Unfortunately. It is part of the efficiency thoroughness trade-off which Eric Hollnagel describes. The challenge is spotting the issues before they become critical. Hopefully you will just end up with a ‘safe scary moment’ to readjust your behaviour. If that does happen, critically look at how far you drifted and why, and put measures in place to stop that drifting.

Undertaking a critical debrief isn't something that happens normally, but it can have massive benefits.

This topic is just one many in the globally unique classes I teach via eLearning, Webinar or in Face-to-Face sessions.

For just $99 you get 3+ hrs of eLearning with lots of additional reading if you want to dig further. If you'd like to push the theory further, join the Webinar-based classes, or if you'd like to get real hands-on experience of learning your limits and how to take your team diving to the next level, look here.