Plan to fail safely - teaching students/candidates for the real world 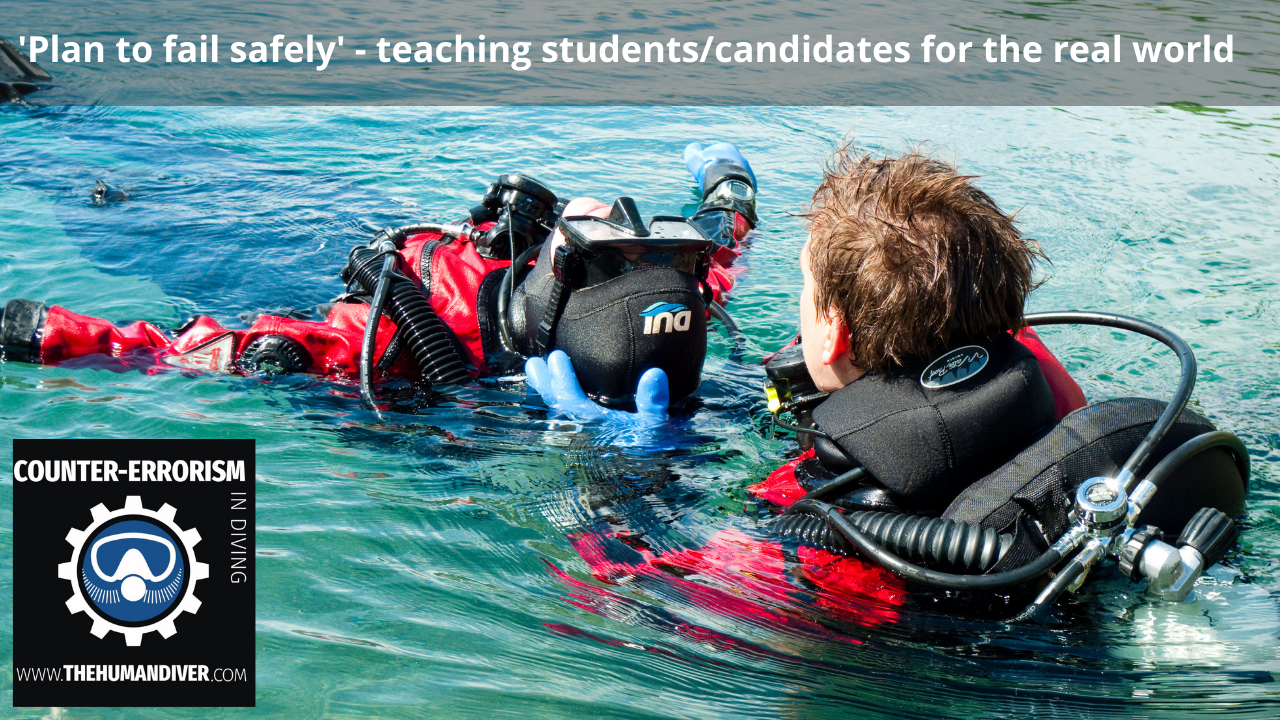 In his book “The Six Skills and Other Discussions” Steve Lewis quotes Hal Watts, the founder of the Professional Scuba Association Worldwide, as saying: “The most dangerous thing about diving is divers themselves.” Watts goes on to explain that “we don’t belong down there and our own poor decisions and our own complacency lead to mistakes.”

This quote came to mind on two occasions recently and that’s why I decided to spend a little time writing about those experiences. If it just prevents one accident it will have been worth it. (The second blog will be released shortly).

Teaching to pass an exam, or preparing for life after the exam

A couple of months ago I was at an Instructor Examination (IE). This particular scuba diving organisation runs these 2-day programmes all over the world, and always in the same way.

Though the order may vary, the examination consists of theoretical exams (dive theory and agency standards), a pool session during which the instructor candidate demonstrates a couple of skills and has to “teach” a particular skill to people pretending to be students. Then they move to open water where they have to teach another 2 skills.

There used to be a rescue evaluation as well but because of Covid-19 this was taken out of the exam. (This is now up to the Instructor Trainer (IT) teaching the instructor course to evaluate. The IT then simply signs a brief statement, promising that the rescue demonstration was “formally evaluated” by him or her).

Anyway, back to this particular instructor exam.

When the group moved to the pool for the confined water section I noticed a woman sitting in the cafeteria. The reason I noticed her was because she seemed nervous. She explained that she was there with her husband. He had been unsuccessful at the previous instructor examination during the confined water part and so he had to come back to re-do this part. I asked her what had gone wrong on the previous exam and if he had done some remedial training (perhaps with his IT)?

She explained that during his first attempt he had been nervous and because of his nerves he had missed the fact that one of his “students” actually didn’t meet the performance requirement for this skill. The examiner had explained what her husband had done wrong and he had then been given the opportunity to prepare his backup confined water teaching assignment, which had been the 5 point descent.

He felt very confident with this skill as he had practised teaching this during his instructor development course. Other candidates in his group had also had this assignment and the “mistake” the students were told to make, was always the same. The IT would tell the person pretending to be the student to forget to check his watch or dive computer (“Time”) before descending.

“But,” she angrily said, “the student at the IE hadn’t made that mistake! Instead, the student had dumped all of his air from his buoyancy compensating device and had simply disappeared from the surface!” Her husband had been too far away to grab hold of the “student”. In real life, a student could have gotten hurt this way, so the examiner had failed her husband. Since there was no backup for the backup, he had to attend another IE to re-do this part, and here he was.

The story of this instructor candidate immediately brought to mind Hal Watts’ quote about poor decisions and complacency. But it also reminded me of something we focus on during the Human Factors in Diving training: Plan to fail safely! As Gareth Lock explains in his book “Under Pressure”, failure is at some point inevitable, so there is a need to fail safely.

If you have an IT who teaches you tricks to pass an IE, then this IT is not preparing you for real-life teaching. The reason? You WILL get students who make different mistakes than the students you’ve taught before. If you don’t plan to fail safely, then you will always be too late to respond. Sooner or later, people get injured or die. Not because they want to, but because they honestly didn’t realise what they were doing something wrong. So it’s up to us, the instructors, to make sure they can fail safely. There’s nothing wrong with making mistakes: it’s how most people learn. But you have to survive for this learning to take place.

So instructors and instructor trainers, here are some questions for you:

This leads me to the other thing I wanted to talk about. It’s about planning to fail safely when it comes to yourself, not your diving or your teaching. I will explain more in Part 2 of this blog. 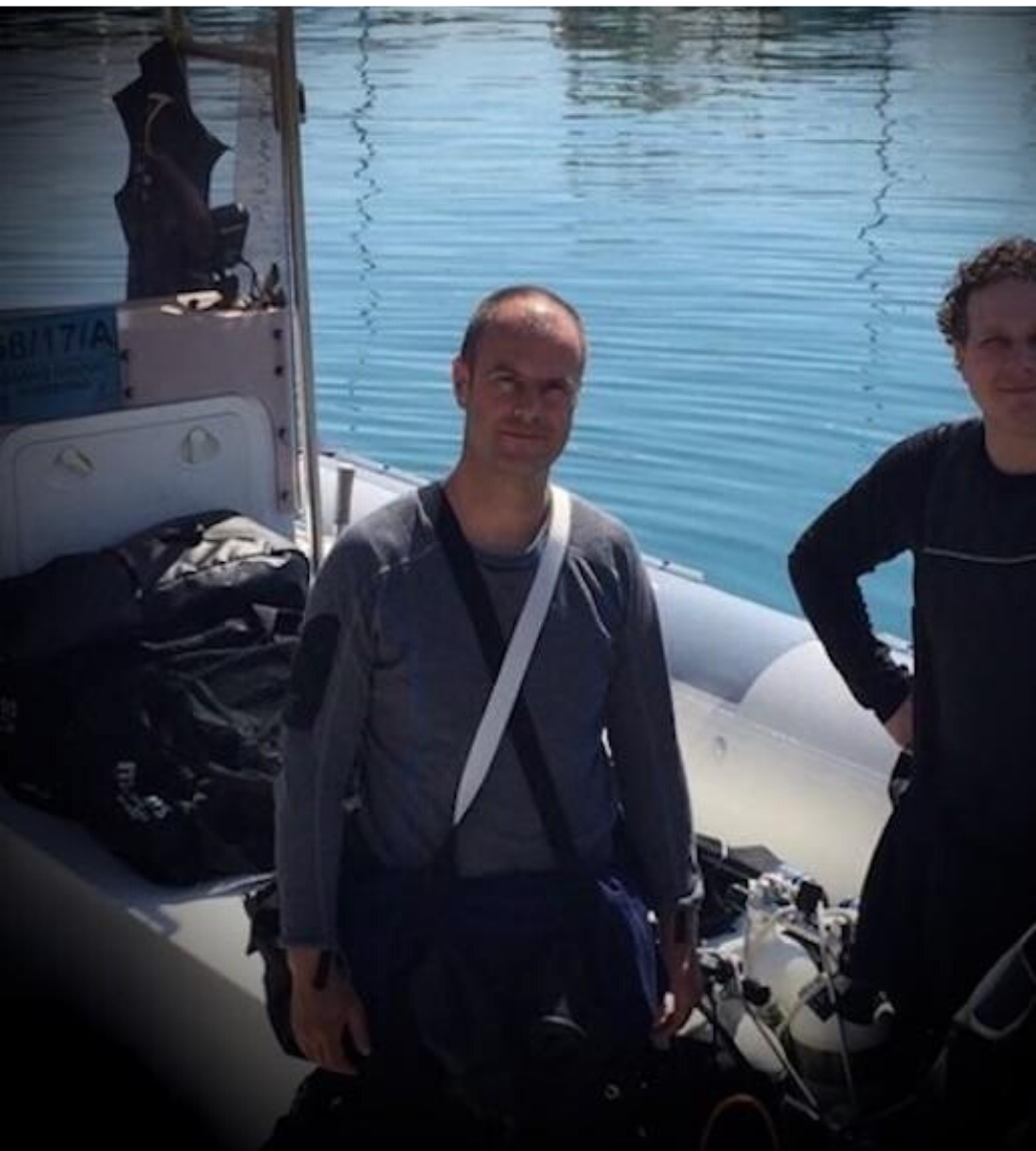