“Whenever there is any doubt, there is no doubt.” 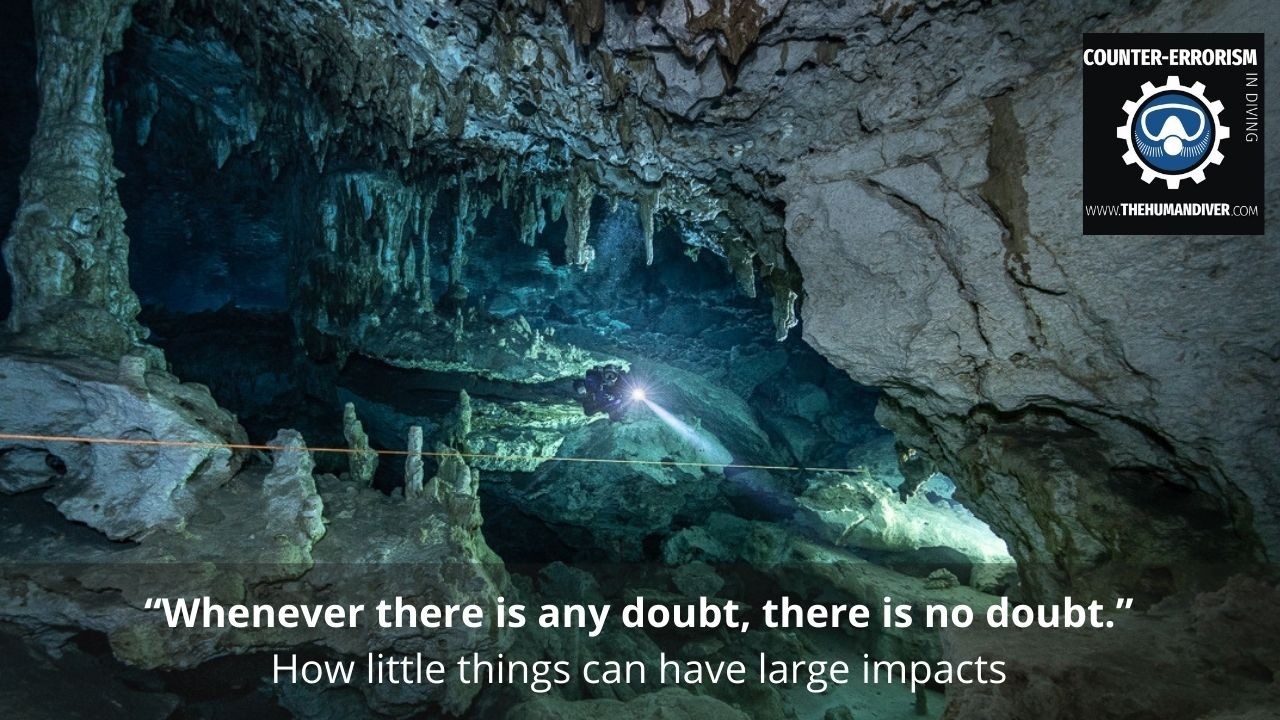 This was a dive with a very simple event that cascaded and got me into a real mess, but once I was over it, the lessons learned are now invaluable.

It was a cave dive in Mexico with two good friends, one of whom had trained me and one that was closer to my diver level. We were all dive instructors and certified cave divers, but only one of us was a Cave Instructor and they had the most cave experience. It was planned as a fairly long three-cylinder dive with some navigation to reach our goal of a particularly interesting section of the cave.

We were diving as a three-person team and I was at the back on the way in (Diver 3), in front of me was the instructor (Diver 2) and upfront was the other diver (Diver 1). We started on our stage cylinder and had to navigate over three T intersections. Along the way, we switched off our stage cylinders, dropped them, and swam on using our “back gas”. As we approached the third and final Tee, I knew I was getting close to turn pressure.

When we arrived at the final Tee, we all made a pressure check and I had around 15 bar remaining (from twin 11L / 80cu ft cylinders) – this would give around 20 minutes to look around and so this was still worth the effort to take the Tee. As I glanced at my teammates, I was sure I saw the SPG of the lead diver (Diver 1) – they were at their turn pressure but had signalled a higher pressure. This was the start of the problem.

I had not reached my turn pressure, and neither had Diver 2 - so I reasoned we had enough gas in the team for the 20 minutes I estimated we would be in the section passed the Tee. I kept this thought to myself.

As it turned out, Diver 1 signalled to turn the dive at about 10 minutes passed the Tee and so we did not use as much gas over the turn pressure of Diver 1 – this seemed “good”. Now that we had turned the dive, this meant that I would now be leading on the way out as we maintain the same physical arrangement in the team. We cleaned up the third Tee and started the long swim home – we had something like 90 minutes ahead of us to get out.

On this swim, I had time on my hands and started to think more about the issue of my teammate, Diver 1, going past their turn pressure. I realised that actually they had done something quite selfish and put the whole team in danger as we now collectively had less gas between us. My thoughts snowballed from there when I realised that there was less gas “for me” and if I had a problem, it was a long way to go, and we had less gas to handle any problem.

I had some horrible thoughts and even imagined what my girlfriend and mother would be discussing at my funeral – I had genuine fear at this moment. I was aware that my breathing rate was increasing and my mind was simply not on the job of navigating home. I knew I should stop to collect myself and so I signalled the team to stop – this was the first active signal of a problem I had given – perhaps 30 minutes after I first saw a problem.

My team were great, and they simply waited for me to give the signal to go. I did not appreciate at the time that they had already seen my passive behaviour as signs of a problem and so they were not adding any pressure in any way.

My breathing had calmed, but not fully and so I thought I should wait for longer. I then realised that I could not wait forever and was probably not going to ever get to my normal breathing level or level of calmness. I would have to “suck it up” and get on with it. I gave the signal to go and we got going.

One thing about cave divers is that it can be very easy to spot their state of mind if you know what to look for. I was checking my SPGs far more often than normal, became more fixated on the line and stopped using my lights to look around as much and the body is simply not as relaxed and elegant as you move. This is classic tunnel vision / perceptual narrowing and easy to notice.

Unfortunately, my mind kept on spiralling, and I felt myself losing it again. I gave another signal to stop. At this time, Diver 2, the cave Instructor took direct action. Essentially, they made sure I was aware of all my gas and theirs – then switched the team order so that they went upfront and I was to sit in the middle. This is the standard order for a three-person team where the “problem” diver is surrounded by other divers to best look after them.

Watching someone else in the lead position took away some of the anxiety and gave me a different focus and also put more light in front of me. Things were getting better now, but I was still conscious I was breathing more than usual and was making mental calculations about my gas reserves – which were “enough”, but the maths was rather a cold comfort.

We reached our stage cylinders, and I knew we had about 30 minutes to go – it was like a computer game “power up” to get onto the extra cylinder and gas - things were getting better.

I was so happy to see the light from the cavern zone and it was not until I was back in the car driving away that I really could say I felt normal. Rather interesting was that I exited the water with my planned pressure and had not in fact been breathing as much as I thought – but my perception of it was clearly a long way off – what else would I have been off about?

We did not speak about the dive there and then – and for me that was right – I was simply not in the right state to talk properly about it or to learn anything from it. I did of course feel rather low and somewhat of a failure for letting myself get into that state and impact the exit. My teammates knew this and didn’t bring it up.

We spoke the next day and I think it is quite true that you often learn the most from the dives that did not go well.

What lessons did I finally learn?

What I like most about this incident is how many separate things I learned from the single, simple mistake I made.

You could say that the whole thing was down to lack of experience – which I don’t dispute, but it is the way in which experience affected different levels of my thinking and actions that interests me.

Keeping quiet is not helpful to anyone and you can bet that I will speak up no matter the company I am in if I am not sure about something. Worrying about how I might be seen means this is not the team for me. The team will benefit from the avoidance of doubt. I actively want to be questioned by divers – if I can’t justify why I am doing something, then how I can expect them to do the same?

We have limited abilities in the water to solve problems – so we should embrace the idea of turning around and going home – this is not our day. The most experienced fighters will tell you it’s better to walk away than engage in a street fight.

When I teach, I work hard to press these points and build a safe, blameless, functional diving team. I can probably sum this all up with a quote from the movie Ronin.

“Whenever there is any doubt, there is no doubt.” Sam (De Niro's character)

An excellent account from a confidential submission. This narrative highlights the power of doubt and what happens when there isn't strong psychological safety and trust within the team. It is often said that anyone can thumb a dive at any time for any reason. However, in reality, this isn't necessarily the case. There are often social pressures that prevent us. Fortunately, the 'instructor' spotted that there was an issue and took control and rearranged the team.
The topic of psychological safety can be found by using the tag 'psychological safety' in the sidebar to the right.