What is a mistake? What is an error? Words have meanings. 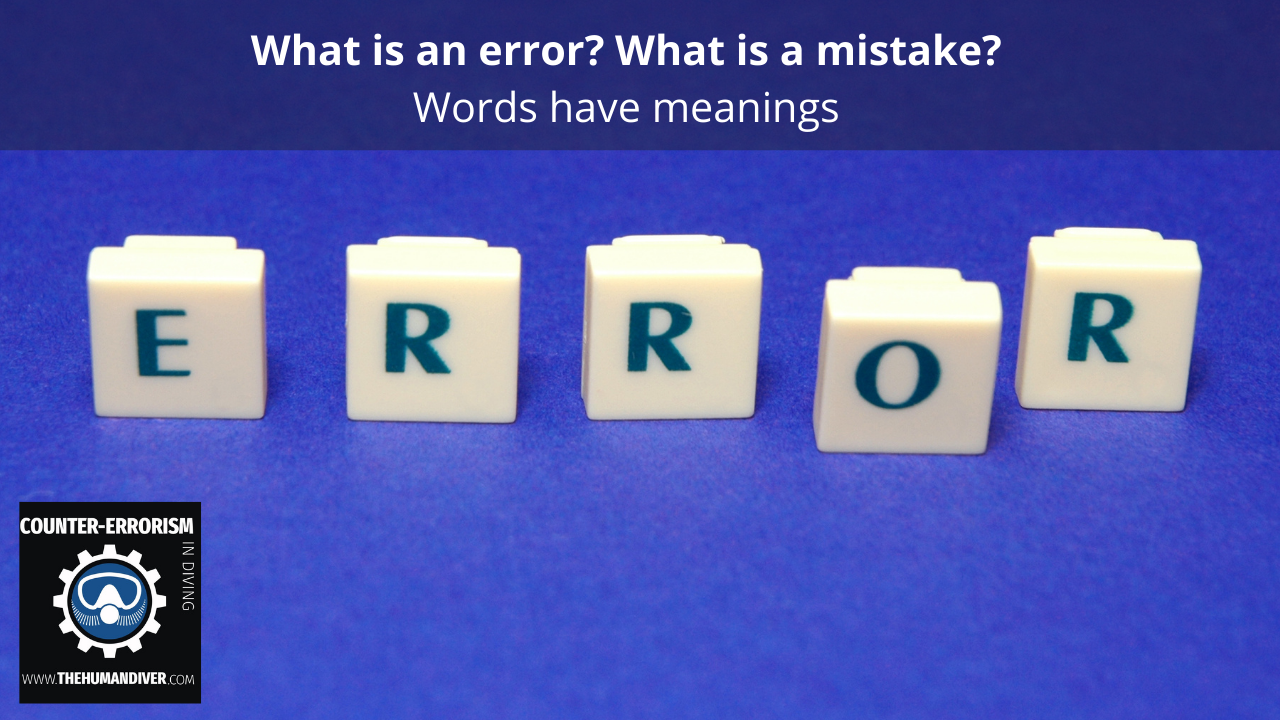 I recently had a conversation with an instructor trainer about one of the most powerful ways to improve feedback and reduce authority gradient. This is achieved by talking about a mistake or error they’d personally made on that dive to show the students that they were fallible and thereby encourage the students to provide feedback on how the instructor could improve their performance. Back and forth we talked about this, and eventually, the instructor said that they didn’t think they’d made a mistake even though the outcome wasn’t what was expected.

And then the penny dropped.

In the safety world, the word ‘mistake’ has a specific meaning. The same applies to slips, lapses and violations. The term ‘violation’ has a significant negative connotation but if you dig into the rationale behind the ‘violation’, you soon realise that we are often in a grey area.

What is an error?

These are unintended and uncontrolled actions. Examples might include slipping with a screwdriver, and damaging the wood; cross-clipping a bolt-snap through others thereby locking them both so you can’t open either; using the inflate button on your power inflator instead of the deflate button.

These occur when we forget to do something. Examples might be forgetting your keys when you walk out the door and the door locks behind you; forgetting to check your SPG at the bottom of the shotline; forgetting which way the exit to the wreck is when you haven’t laid and marked line.

Where you think you are doing the right thing, but it is the wrong thing. This might be where you take a wrong turn while driving because you were thinking back to your previous experience of driving down this road; giving a dive brief to navigate a wreck and describe the wreck entry point as the 2nd hatchway instead of the 3rd; teaching a student how to undertake a specific in-water skill but your idea of how to teach it is flawed because you’ve slowly drifted from your previous training.

In each of the above situations, we consider them to be errors of omission i.e., we didn’t do something that we were supposed to (for whatever reason). These are the ‘honest errors’ that we normally accept (as long as the outcome isn’t too severe). Research has shown that we are more forgiving of errors of omission than errors of commission (described below)

In the main, we recognise that punishing someone for these sorts of honest errors is unlikely to help change behaviours because they are part of human nature - we all do them. Unfortunately, outcome bias can negatively impact this thought processes. For example, forgetting the keys inside your house isn’t a major issue, but what if the diver forgot to let another diver know that they hadn’t replaced the out-of-date oxygen cells in their CCR and the diver had an oxygen toxicity event and drowned? Fundamentally, forgetting is forgetting and shouldn’t impact the perception of the severity outcome... 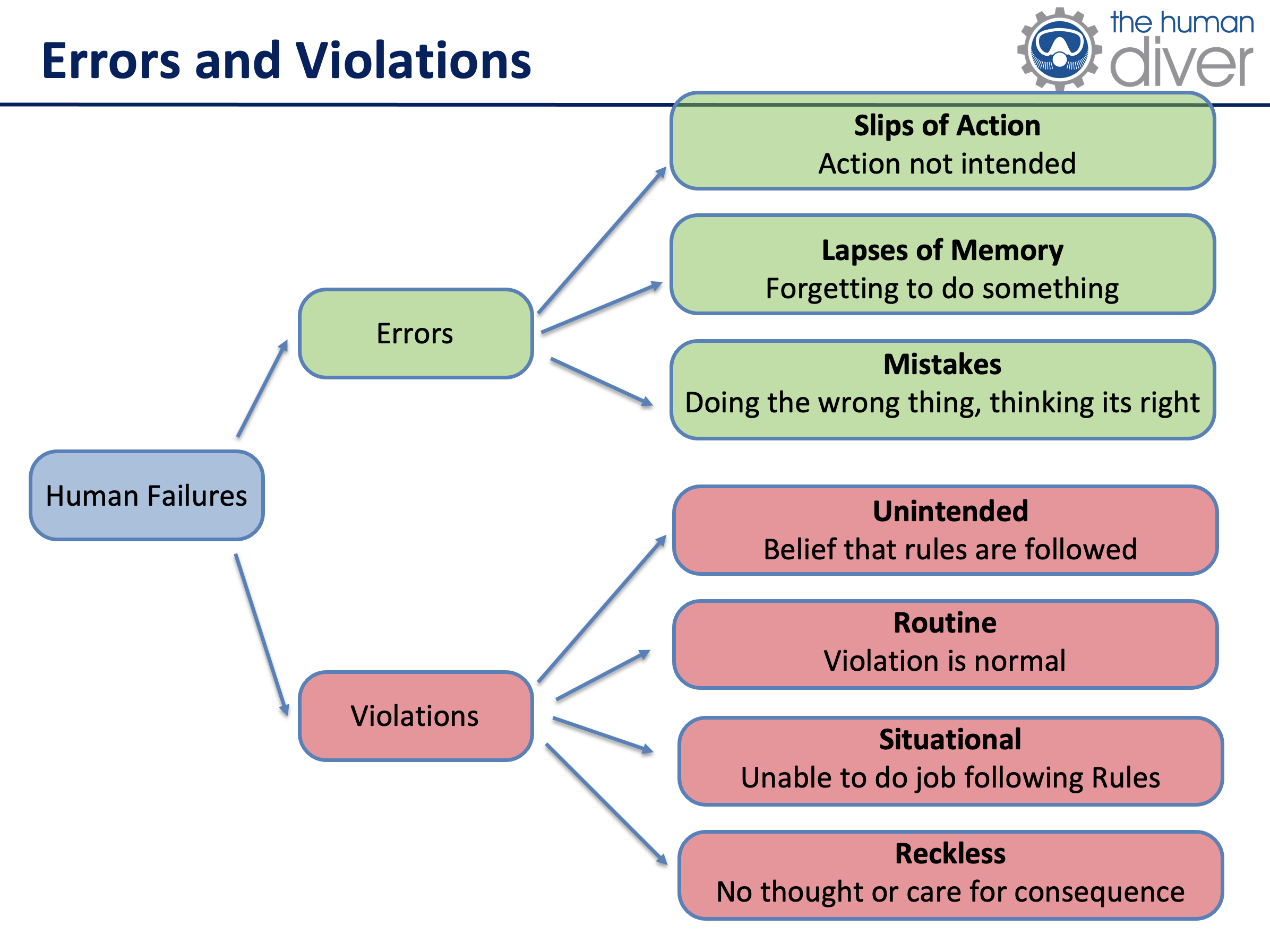 Now moving onto violations. These are normally defined as some form of intention to break the rules for our own personal gain and are often associated with recklessness and negligence. They are errors of commission, and research has shown that we are far less forgiving of errors of commission because we believe that those involved should have known better and should have applied the rules. However, as we’ll see below, things aren’t always that clear when we look a little closer at the context.

This is where you think you are following the rules, but you aren’t. These are very similar to a mistake but there is a rule present whereas mistakes are ‘normal’ behaviour. An example here might be that the standards have changed and you were not aware of this change. Unfortunately, you were teaching to old standards when something went wrong, an investigation occurred and this was picked up. The notification for the standards change went into your spam folder and so you weren’t aware. Another example might be when a diver pair become separated in a cave, one (diver 1) exits thinking the other (diver 2) has routed another way back to the surface. Diver 2 is found to have drowned as they were lost and didn’t route out the way diver 1 thought they would.

This is where you break the rules because it is not possible to undertake the task without following them. An example of this might be because the dive centre owner has said that you need to take 1 more diver on the training dive because another instructor has called in sick; this took you over the maximum number of students on a course. The client only has one more dive to do and then they become certified. It is a low-risk dive, and you accept the task. Besides, the boss has said if you don’t do this, there are a number of other instructors waiting to join this dive centre…Another example might be descending below the Maximum Operating Depth (MOD) of your gas to rescue your buddy. You are consciously making a decision that one risk (benefit) is better than a loss.

This is where everyone is breaking the rules, and ironically, to follow the rules would mean that you would be the odd one out. Fundamentally, this is because we are social creatures and we like to conform. Speeding on the motorway is a great example of this. In most countries, speeding on the motorway is the norm, unless there are cameras or police around, and then everyone conforms to the law. In diving, this might be completing a where you should complete a pre-dive buddy check, analyse your gas before going diving, stay within breath-hold swimming distance of your buddy or when you are separated from your buddy at depth and then not searching for 1 min before ascending.

This is a special case and in the professional safety world, happens very rarely, less than a fraction of a per cent. This is where there is genuinely no thought or care for the outcome. I would argue that in the diving world this is likely to be rare too. If a diver or instructor knew with 100% certainty that something bad was going to happen, they wouldn’t likely do what they did.

James Reason and Jens Rasmussen showed that errors can occur at each level of human performance:

Errors can also result from operating at the wrong level:

If we understand the causes of the errors, then we can something about the conditions to reduce the likelihood that errors occur. James Reason said, "We can't change the human condition, but we can change the condition in which humans work."

So what does this mean to us as divers?

First off, we all make errors and most of us will also commit violations of some form or another to achieve the goals and rewards and avoid punishment or retribution because there are continual operational dilemmas in how we go about our lives. An error can be considered an unintended deviation from a preferred behaviour with an unexpected outcome. Note that the preferred behaviour might align with the 'rules' (depending on the culture and organisation) or it might not. After the event, because of the hindsight bias, we are able to identify where the errors and violations took place, whereas in real-time they are not easily identified because if they were, they would be corrected and the error/violation would not have happened!

Secondly, where outcomes are severe, they will attract more attention than errors and violations that don’t have severe outcomes, this is known as outcome bias. What this means is that we are not judging the quality of the decision at the time based on previous knowledge, skills and attitudes, but rather the severity of the outcome. For example, when a diver enters a wreck without a line, silts it out and drowns, we are more critical than if the same activity ends up with the diver back on the surface a little shaken.

Thirdly, with the exception of recklessness, errors and violations provide learning opportunities for those within (divers/instructors) and in charge of (dive centre managers, skippers, training organisations, manufacturers, authorities) the system. In fact, you can look at violations as being an opportunity to better understand what rules are in place, why they are in place, and what value they add to those within the system. Crucially, if the rules are being constantly broken, then they are most likely ineffective rules focused on protecting the system or the organisation rather than keeping individuals safe. However, such an attitude doesn’t play to the focus on liability so prevalent in Western cultures. Another article on why people break rules will be coming shortly. 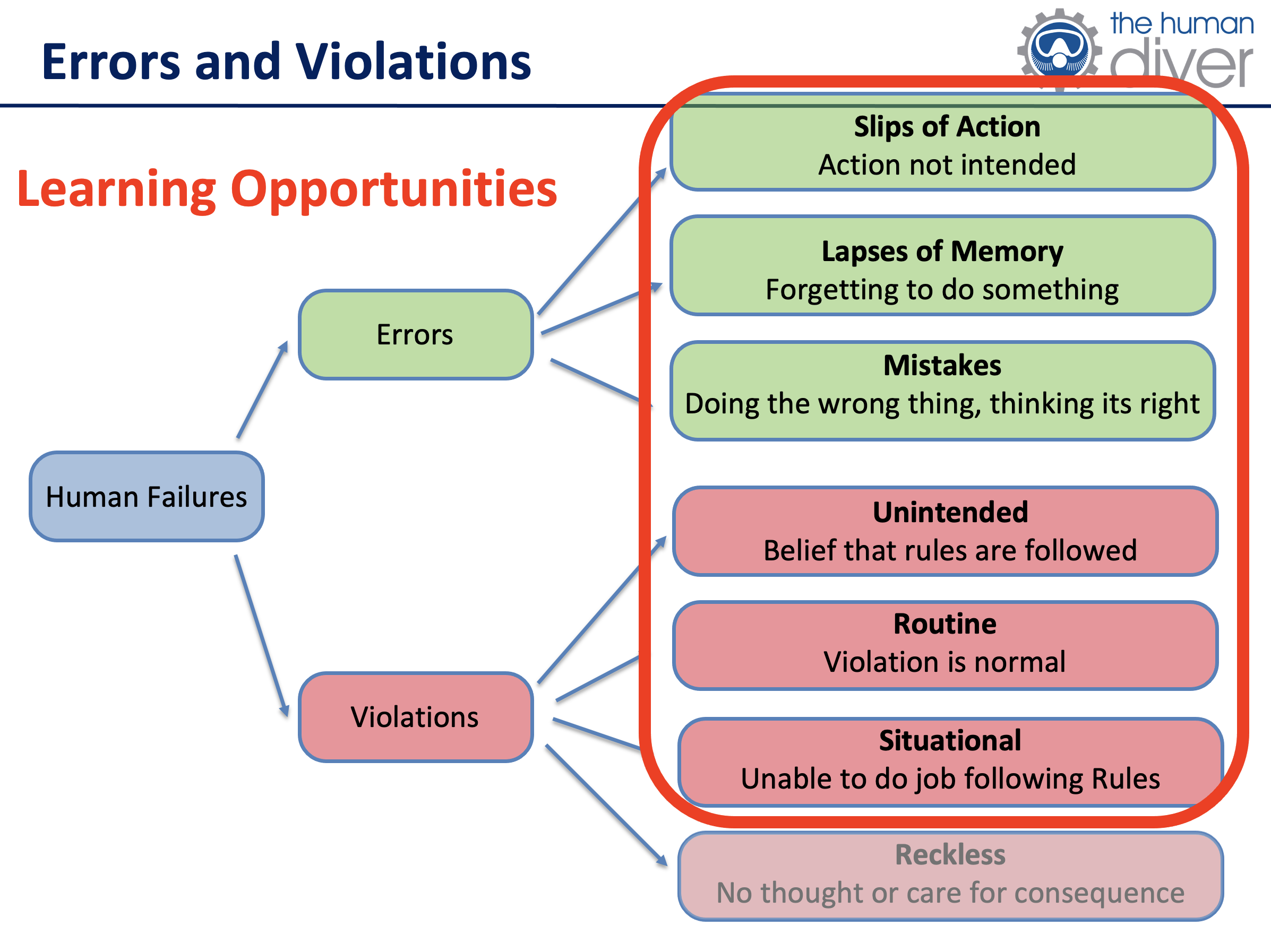 So back to the original discussion with the instructor trainer. A mistake is an unintended action where the instructor believed they were doing the right thing but weren't, and an error is an unintended deviation from a preferred behaviour with an unexpected outcome, preferred being on the part of the instructor. In both cases, there are learning opportunities and if the story is told well, those in positions of authority can increase psychological safety by lowering the authority gradient and thereby increase learning.

Finally, you cannot create a Just Culture if you don't understand how human error occurs and manifests itself in a human/technical system.