Surely if we blame and punish, things will be safer? 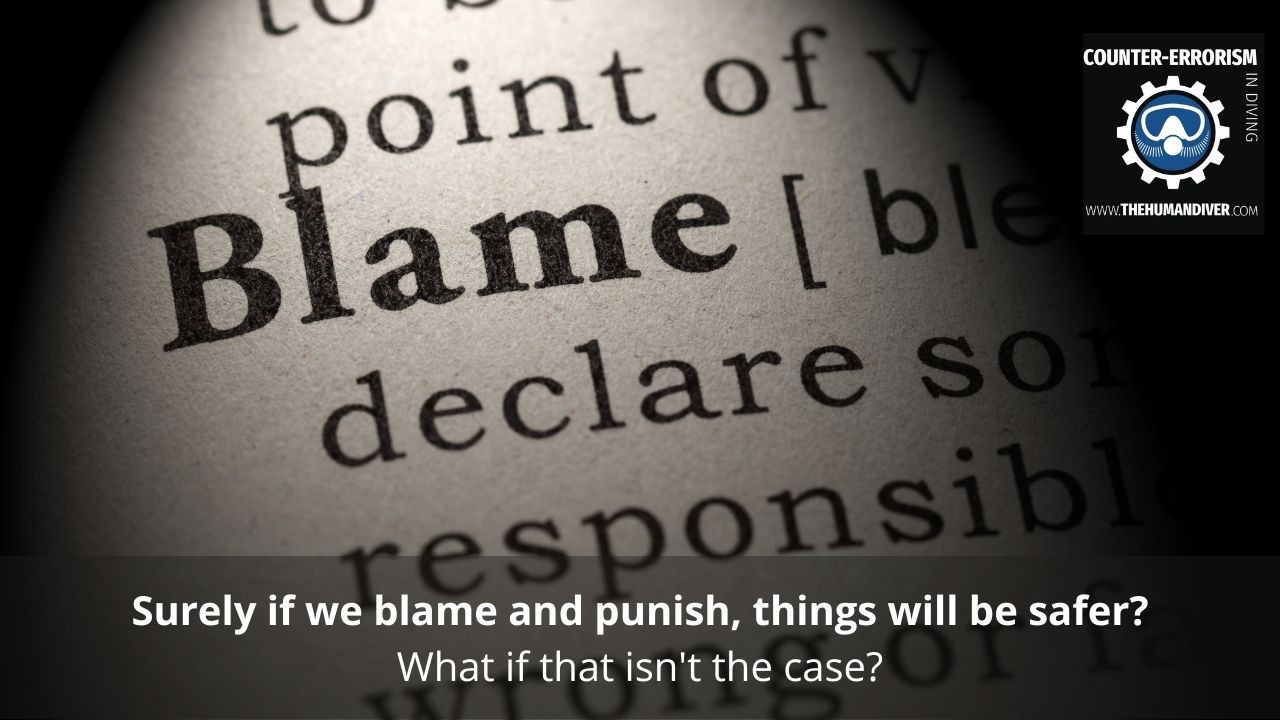 A recent post on a Facebook Group described a situation where a novice diver was taken to 45m and through an arch, well beyond their certification limits of either 18m or 30m (they only had 12 dives).

“A few of my dive friends saw this dive watch picture and were really concerned for my safety and angry at my instructor for doing this. I get it is dangerous, but I was guided by my coach who has a lot of experience, and it was a really cool dive spot and experience. You guys have any thoughts on this? Is the instructor to blame? Am I to blame? Would you guys ever go down this far as an inexperienced diver?”

As per normal, there were a number of replies who said that this instructor/guide should have been fired and not allowed to teach again because of their breach of standards. A couple of examples of which are below.

“Absolutely unacceptable, and criminal behavior on the part of the instructor, he should be reported to his agency and banned from guiding and teaching it is also obvious he did no briefing and noting, he could have put you in deco and you would not know what to do.”

“You both should have your certs ripped up. He should be booted from whichever agency he teaches with, & you should go back to the classroom. You are as much at fault as the "instructor" as you should also have fully understood & signed the "safe diving practices" statement. NEVER DIVE BEYOND YOUR CERTIFICATION LIMITS.”

There is a normal perception that failures and breaches of standards should be met with some form of punishment, in effect, ‘an eye for an eye’. In such situations, the social commentary often says that the instructor should lose their ability to teach, even if the commentator doesn't understand or know the context. The overriding thought is that by applying some form of punishment, especially a severe one, the problem will be prevented from happening again, either by that individual or by others, because there is a consequence for breaking the rules. Unfortunately, psychology research shows it doesn't work that way...

There are three broad issues that need to be addressed before we even look at the punishment issue. The first relates to the novice diver who doesn’t know what they don’t know and are subject to considerable authority gradient by having an instructor giving them instructions/directions to do something. The second relates to the instructor and the perception of risk/reward while undertaking an activity which is outside of the certification limits and what would be considered acceptable behaviour when there is a duty of care. Finally, the need to consider when/where the diving is taking place - inside or outside of a formal training environment. 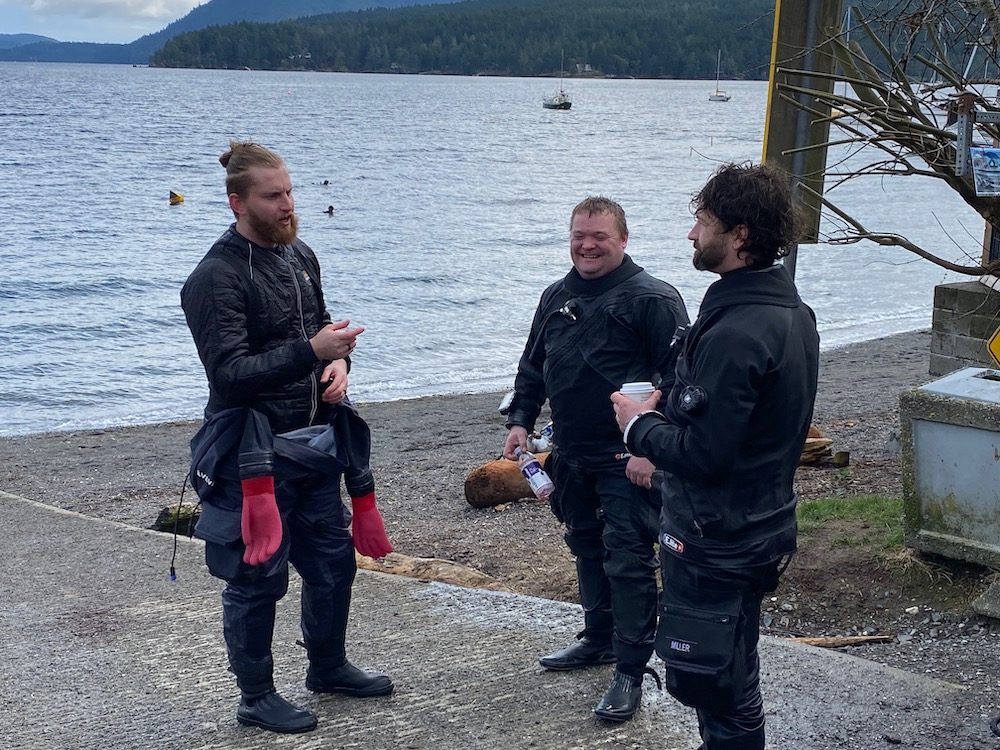 It is normal human behaviour to not question those who are more senior or more experienced when we are in a face-to-face environment – there is a lack of psychological safety. As observers, we have no idea how this dive was discussed/described prior to it taking place. It may have been ‘bigged-up’ and the instructor may have said that he believed the novice was a competent diver and so a quick dive to the arch at 45m on air would have been well within their competencies. In this case, saying something against the instructor’s plan is not easy for the novice. As such, those in leadership and role-modelling positions must be taught about the impact/influence they have on others as they are leading others. This isn’t just in the physical sense of being in front and directing the activity, but also psychologically leading and taking control of the decision-making and making it harder to speak up. Aviation, healthcare, and Oil & Gas domains have numerous examples of accidents and incidents occurring because of authority gradient or cross-cockpit gradient and this is one of the reasons that Cockpit/Crew Resource Management (CRM)/Non-Technical Skills for Surgeons (NOTSS)/Anaesthetists Non-Technical Skills (ANTS) and Well Operations Crew Resource Management (WOCRM) programmes were developed and deployed. These materials are what underpin The Human Diver courses. 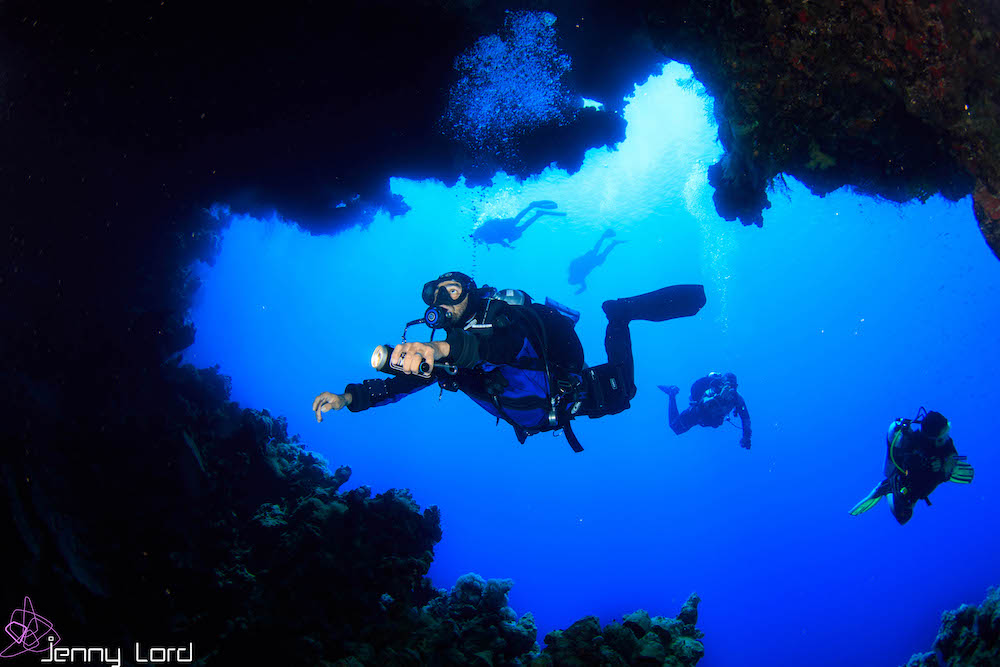 The decisions we take concerning risk/uncertainty are nearly always based on some form of reward or punishment.

Furthermore, there is likely an expectation from the client base that they get something ‘different’ or ‘exciting’ from the 'normal' guided dives. This is no different to what happens in Mexico where novice divers are taken into caverns and then off the main line or caves where they shouldn’t be. This leads to an ‘exciting’ dive and the instructor/guide gets a bigger tip. The instructors/guides are often working for managers who expect them to give their clients a memorable dive or trip, so they get referrals and recommendations. The thing is that novices often don’t know what they don’t know and then leave positive recommendations without understanding the risks they faced during the dive. In many cases, it was pure luck that the event didn’t end up going very wrong.

Human nature says that if nothing goes wrong, the behaviour must have been okay. There are a number of biases working against ‘safe practices’ at this stage. 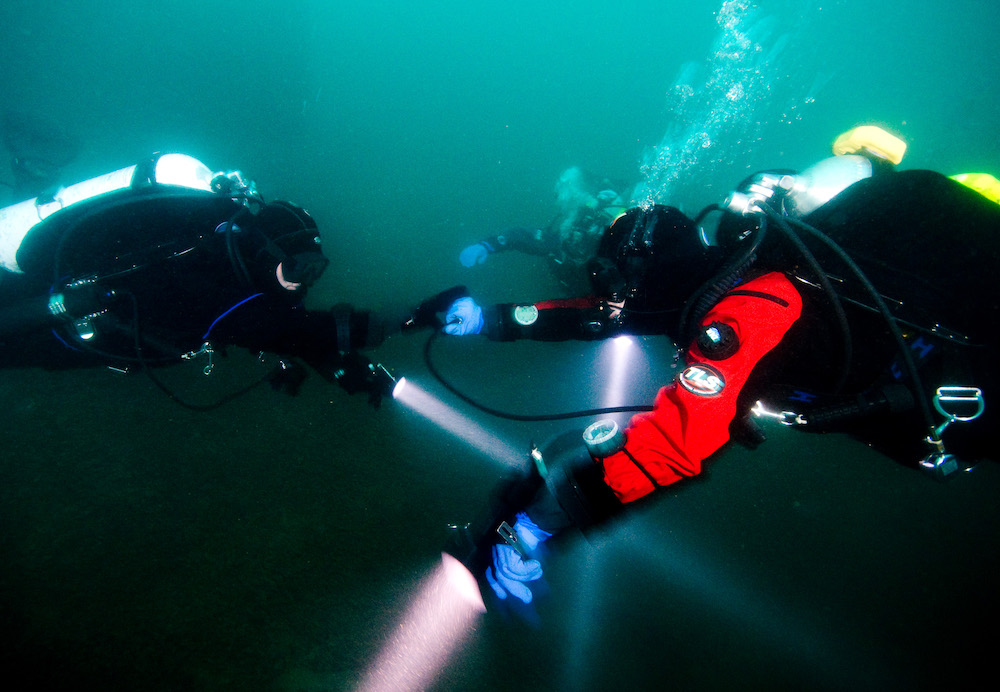 Inside/Outside of the Training Environment

In the main, there aren’t any formal rules which concern diving outside of a formal training or guided environment. No one is going to stop you if you dive beyond your certification limits. (Some exceptions do exist like the Maldives where you are not allowed to dive below 30m). However, if you are inside a formal environment where you have a duty of care and something goes wrong, expect some form of negative consequence even if the breach of standards didn't contribute to the event!

The statement "Always dive inside your limits" is potentially flawed. It infers that the only way to progress is via formal training, and yet formal training normally follows a prescriptive process that teaches you specific skills, it does not teach you experience or expertise. Many of the technical instructors I have spoken to expect their students to have dived beyond the limits of their previous certification as part of their own developmental process. The skill is understanding where the potential failure points are and managing the risk accordingly. 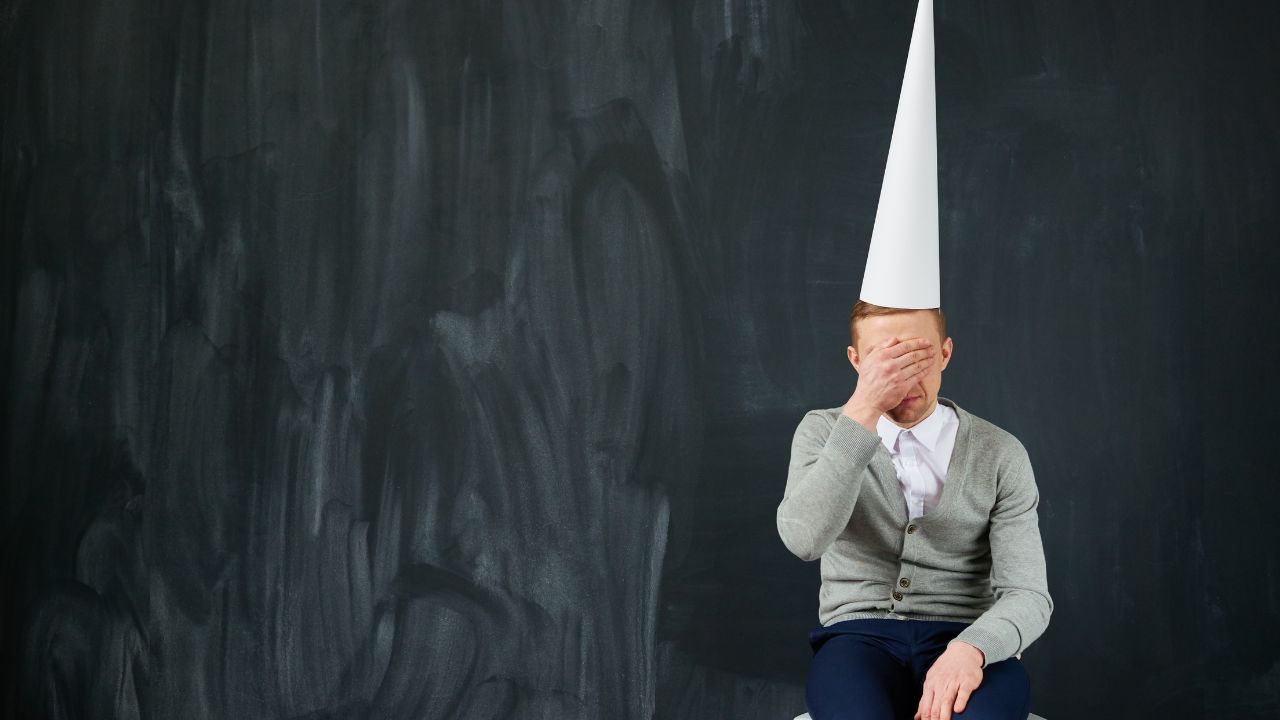 Punitive Action or Learning from an Event?

In this case, the novice diver had the courage to post their account online and this should be congratulated. It isn’t easy to talk about a mistake you’ve made. For those who say that the novice should go back to re-earn their diving certification, this negative approach means that the prevalence of such events is hidden because people will be afraid to share their stories. Everyone knows these sorts of events occur, but nothing gets reported formally because an injury or fatality hasn’t happened. Lack of data does not mean a lack of a problem. Indeed, there is willful blindness in some cases at the organisational level regarding such deviant behaviour, and even if something bad were to happen, it would be a diver/instructor problem and nothing to do with the agency. This is despite the way the organisations influence the general behaviour and marketing across the industry.

In terms of the instructor losing the instructor certification. Do you honestly think it will change the behaviours if the rewards that are in place remain? You can’t treat ‘bad apples’ if you don’t look at the barrel in which they sit. There is a whole blog on this topic here. There are lots of people wanting to become instructors and fill that slot if the instructor is fired. Fundamentally, if you don’t change the environment, the same deviant behaviours will continue. If those with integrity leave, the overall quality will also drop.

While it is easy to punish the individual for their breach of standards, it is not likely to make any difference when it comes to the behaviours of others in similar situations. Fear is not a great motivator of ‘good’ behaviour. Rather, what it does is hide ‘bad’ behaviour when the circumstances require such behaviour to support the goals or rewards in place when dealing with a client or student. Look to change the environment, not the people! 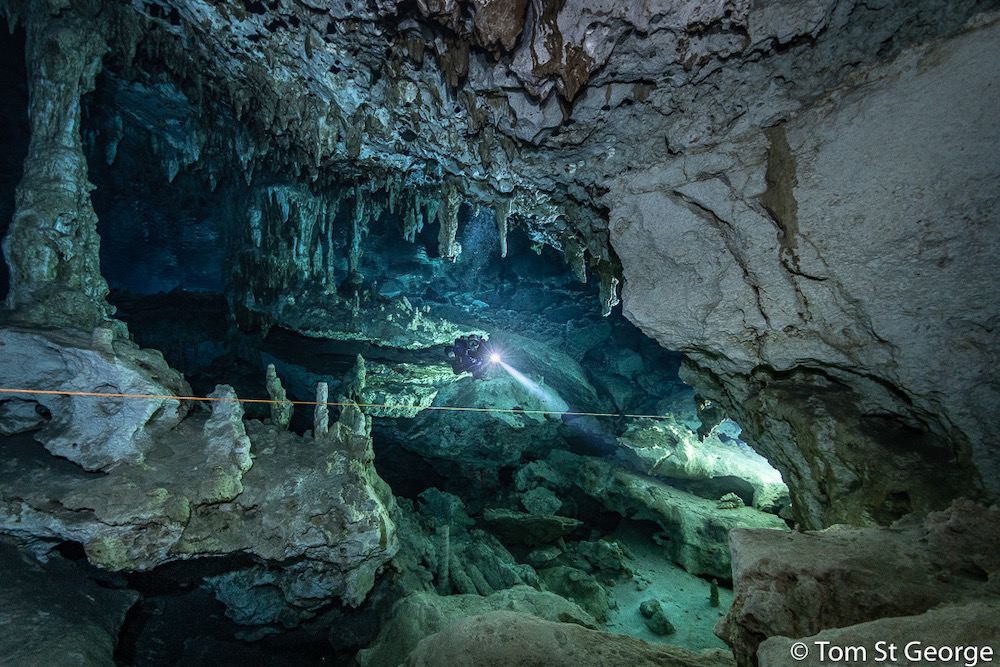 How do we address this sort of problem?

Firstly, at the individual level, we need to understand the context of the activity. What does 'normal' look like? How is it making sense for that individual (or dive centre) to do what they do? Jumping up and down and saying counterfactuals (they should have, could have, would have) won't solve anything.

Next, it is for training agencies to recognise that drift and deviation WILL happen. Period. Expecting all instructors to adhere to the rules when these commercial pressures are present, and the client base doesn’t know any better, is naïve. Quality management must be proactive, not reactive.

Next, we should also recognise that drift is more prevalent outside of the supervision of Instructor Trainers/Course Directors (who also drift by the way) and therefore some form of education and coaching regarding the nature of ‘human error’ and ‘human factors’ is needed at both the instructor and the diver level in the same way that other industries have done this. Pure compliance is not the answer because perceived compliance produces an illusion of safety.

The research surrounding high-reliability organisations has shown that they aren’t safe because of continued compliance to rules, but rather the social structure and associated behaviours they have which recognise that error is normal, that blame adds little value to learning, and finally, that context drives behaviour. A social structure which allows deviant or errant behaviour to be called out and without fear of retribution when doing so.

Diving is marketed as a sport for all, and that many can make it to the Pro level as long as they practice and pay their fees. However, instructors are leaders and while everyone has the potential to be a leader, it doesn’t mean that everyone can be or should be one. This requires integrity at the IT/IE/CD level. Sometimes the commercial imperative can override the moral or safety argument.

Finally, fixing the ‘bad apple’ without looking at the barrel is never going to reduce the likelihood of such events. It does make us feel better (for a short period of time) because some form of punishment has been dispensed, but eventually, we realise it didn't make much difference to the overall system and its safety.