The Importance of Psychological Safety in Debriefs 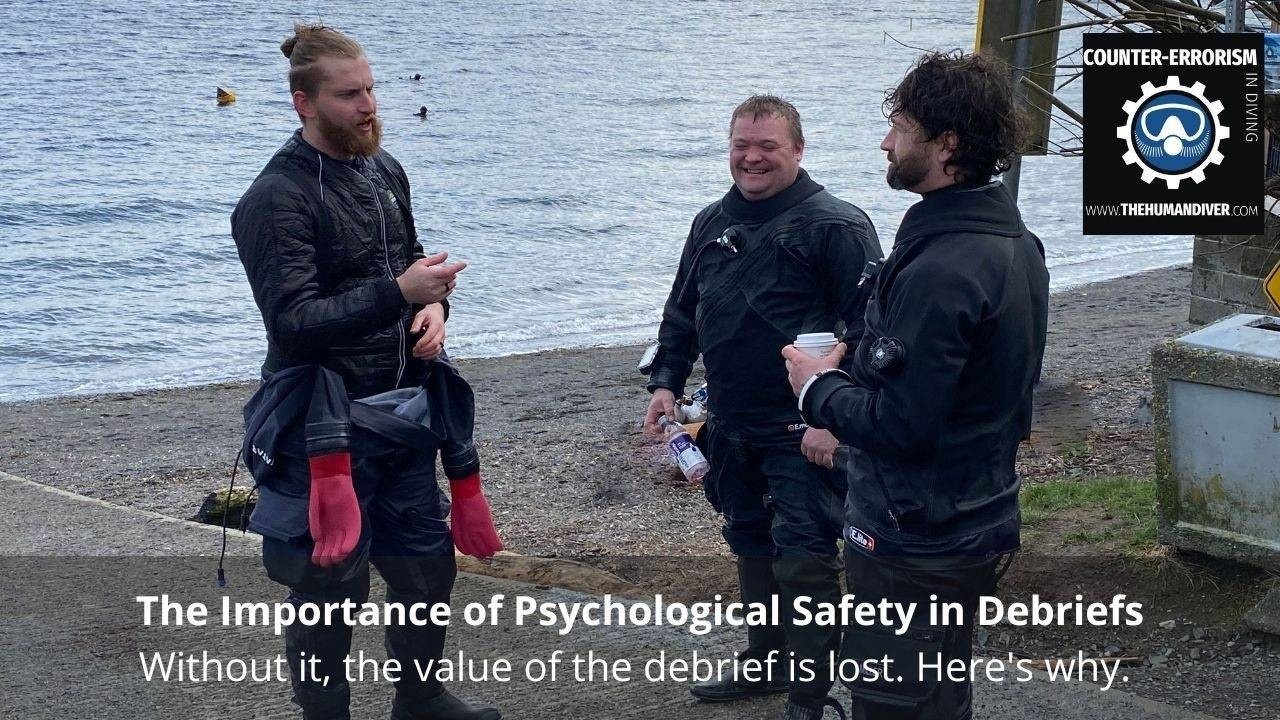 I think most people would recognise the value of a debrief when it comes to learning and improving. The difficulty is making them work, and this difficulty exists on multiple levels. The giver needs to understand how to frame the message and ensure it is both ‘caring and challenging’ (Kim Scott, Radical Candor), and the listener needs to understand that message is there for improvement and not argue with it.

In diving, debriefs are often focused on the technical aspects of the dive, especially in a training environment. In the training environment, this is about how to improve your skills so you can pass the course and then dive more safely and achieve more following graduation. The problem is that divers are rarely taught how to debrief a dive themselves and so they use what they’ve picked up from their ‘normal lives’.

The Human Diver uses a framework that was developed some time ago based on personal experience from aviation, from Robert Teschner (USAF Top Gun graduate and ex-boss of a F-22 squadron), Werner Naef (a good friend from NZ), and Amy Edmondson (expert on psychological safety). 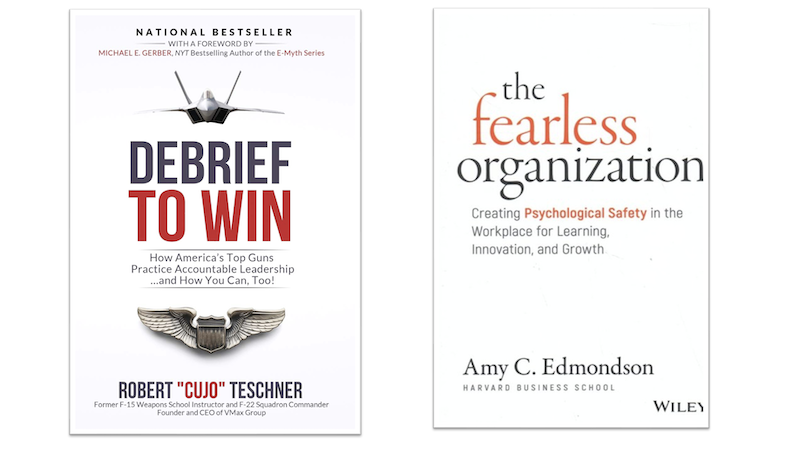 The structure defines what we were supposed to do, creates a psychologically safe environment by the debrief leader talking about something that didn’t personally go to plan or where they made a mistake or ‘drifted’, then covers the pre-dive logistics, planning, briefing, then the learning from both individual and team perspectives, and the finally identifies what needs to change post-debrief. This all sits under the acronym DEBrIEF. The ‘r’ is intentionally small because the review of the timeline doesn’t normally contribute to the team or individual learning.

It doesn’t take long to learn the DEBrIEF model, but it does take time to practice and reflect on its application to get it to work. The following was submitted as homework by one of the students on the currently running 10-webinar series about the topic of Psychological Safety and Just Culture. To me, and others on the course, it shows that you can make DEBrIEFs work! 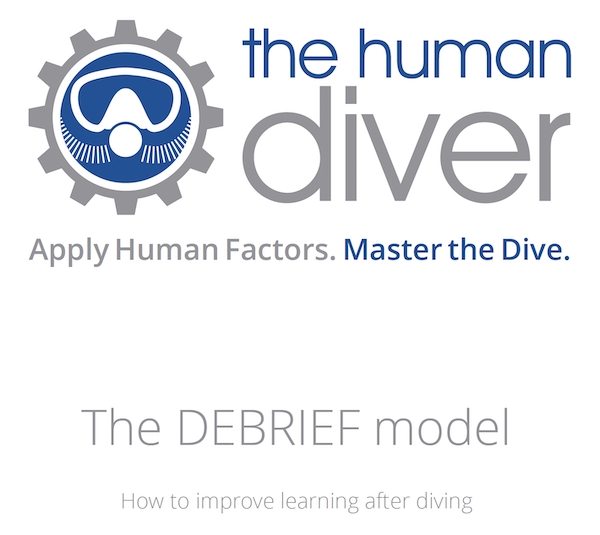 After becoming a DM, I have guided a few club dives and wanted to create a Just Culture within the divers I was guiding but was not able to get the divers to open up about what they could have improved on. I would often ask, questions like “how well did the dive go?” or “what was something you could improve on?”.  Both these questions didn’t really get the divers talking about what they could improve on. Most of the answers were very basic and lacked self-reflection like “it was great!”, or “I saw a really cool animal!” or they would blame external factors such as the current, the rental equipment or other divers for their issue but did not reflect on how they could have improved the situation.

On October 8th, I guided a dive and I decided to invite the divers get lunch after so we could debrief the dive which would allow much more time to chat instead of at the dive site where people often rushed off. For those could not make it, I still debriefed with them and ask similar questions as above but didn’t get good answers.

After attending OzTek 22 and participating in Gareth Lock and Mike Mason’s DEBrIEF workshop I learned that I should first lead and provide an example to my own question (what issue did you have?) for several reasons.

2) Demonstrate that even a “Pro” can still make mistakes.

3) Provide an example on how I would like them to answer the question.

4) Demonstrate that I don’t have perfect dives and I need to work on being a better diver.

5) Demonstrate how it is possible to learn from my own mistakes.

6) Prove to them that they won’t be judged for sharing a mistake (as I just admitted to doing a mistake before).

Last weekend, I tried to implement this strategy but had no luck. We talked about the dive and then they started asking me about tec diving and OzTek (I should have brought it back to what I learned about the DEBrIEF workshop but didn’t…). I even had a great example; I forgot to attach my camera tether to my camera rig which forced me to carry it the whole dive rather than clip it off or let it dangle if there was an issue. I think part of the reason is I’m a bit more of a quiet person and often don’t say as much as I’d like to say (often a good thing) but it can be detrimental when I am supposed to be the leader and lead the discussion.

We had a good conversation and debriefed a little but didn’t mention what we could have improved on I think because it was such a casual setting. 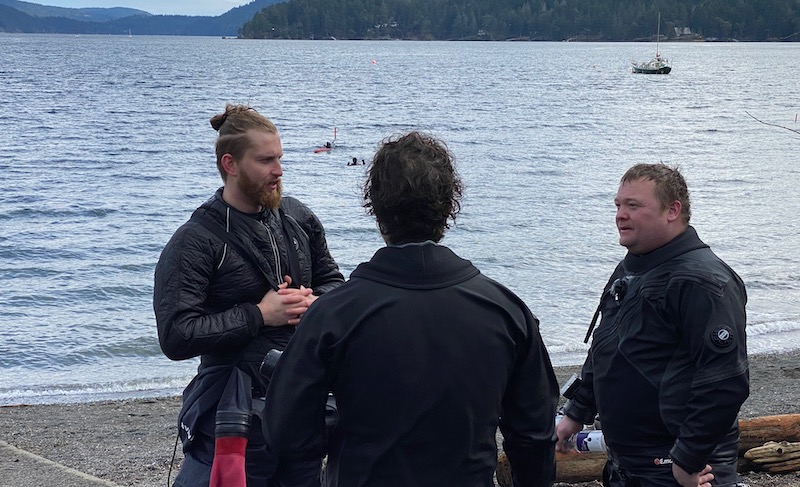 Part 2: How I Improved

This past weekend, I guided a club dive, and we went out for coffee after. This time I was able to control the conversation a bit better and I asked them, “what did you like about the dive?” and “what was something that you would like to improve on?”. I answered first and said that I had a bit of a leaky mask, I had to clear my mask a lot more than I normally do. To improve this, I will trim my moustache down a little (I normally do but didn’t before this dive) and double-check that all my hair is pushed away from my hood so that no hair is under my mask. I also mentioned that I struggled with keeping an eye on everyone in our group (there were four other groups diving). At one point (probably about 10 seconds), I couldn’t see one of the divers. I thought he followed another group and was no longer following me; thankfully, that wasn’t the case. Next time I will take greater care to note each of the diver’s equipment (wetsuit brand, mask colour etc.) so that I can always keep track of all divers. Also, if I notice a bunch of groups, I will wait until they have passed (keeping my group together).

After explaining my issues, I asked each of the divers what they struggled with, and they all had good distinct answers! Most of the time, the divers were able to think of a solution themselves (which was great to hear)!  Sometimes they had suggestions for other divers too.

Some of the things they wanted to improve included using one-handed hand signals, staying closer to their buddy, defogging their mask continuously, stirring up the bottom (better buoyancy and trim) and keeping an eye on the correct group. Some of the divers mentioned that they struggled with more than one thing and others agreed and tried to share what worked for them.

Hopefully, next time I guide, I will add another part of the DEBrIEF model and improve my debriefs.

When I saw this response, I was really happy. A diver had watched a presentation from Mike and myself (which Mike and Jenny are going to reproduce in a Zoom call) and learned the power of vulnerability. They applied it and things change. You can too.

Debriefs are an essential way of making improvements. They provide a structured way of delivering feedback. The structure allows the speaker to know what to say next, for the rest of the team to know when their voice will be heard, and also to pick up the leader if they miss something. However, a structure is not enough if you don’t have psychological safety. That is what the ‘E’ in the DEBrIEF model is about. Once you have that, you will get lots of contributions, ideas, and learning. Without it, your debriefs will have limited value, they will wither and die, and people will say “we don’t need to do a debrief because we don’t learn anything.”

Gareth Lock is the owner of The Human Diver, a niche company focused on educating and developing divers, instructors and related teams to be high-performing. If you'd like to deepen your diving experience, consider taking the online introduction course which will change your attitude towards diving because safety is your perception, visit the website