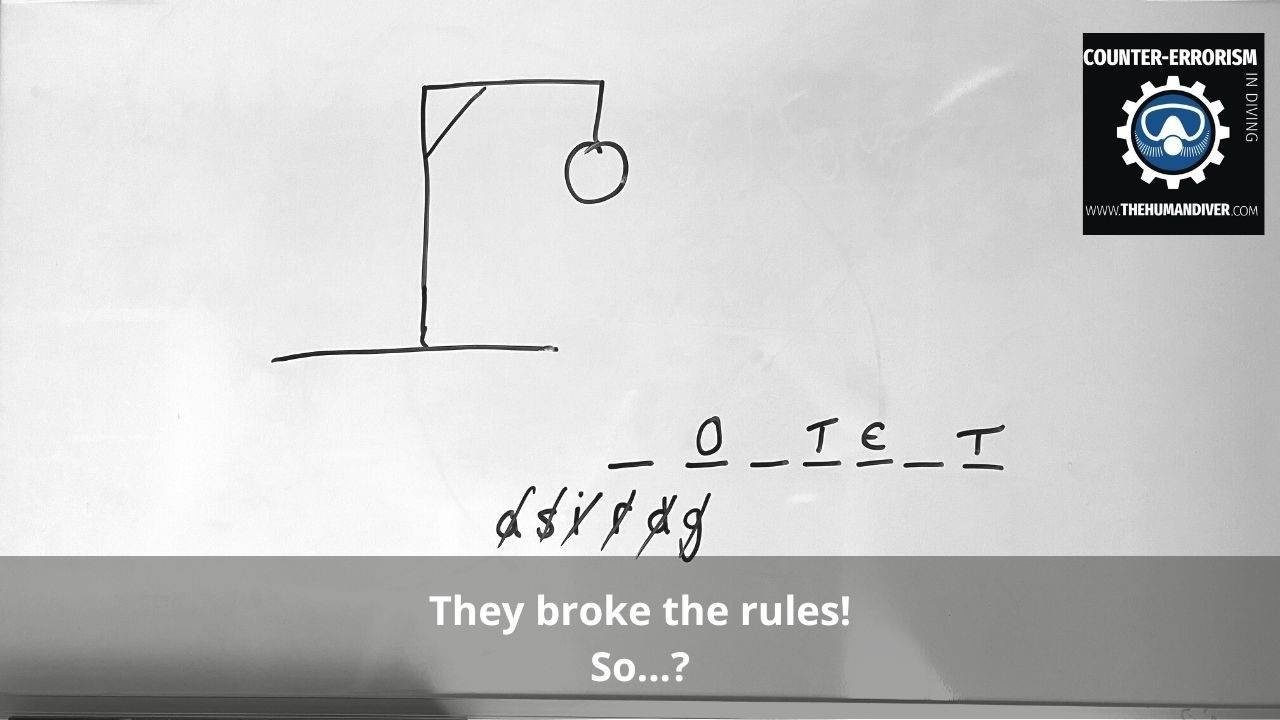 When something goes wrong, and there has been a deviation which appears to be a ‘root cause’ of the event, one of the first cries that come out is that they broke the rules, and therefore those involved should be punished because of their behaviour. This cry comes out because the rules are there to be followed, and if they aren’t, accidents will happen in the future. The problem is that things go wrong when the rules are being followed, and they don’t go wrong when they aren’t!

This poses a problem for our brains, especially our socially-focused brains - we like simple solutions, even if they relate to complex problems. Unfortunately, science has shown us that in some cases, our immediate and quick (often emotionally-driven) response is wrong.

What is the Purpose of Rules?

So, what is the purpose of having rules in diving? Normally, they are based on something going wrong in the past like running out gas, getting lost inside a wreck or cave, having your single light fail in a cave and so can’t follow the line, not having direct control of students and them doing something dangerous to themselves, or having an oxygen seizure because of high pO2 in your breathing mix. I am sure you can think of many more.

I believe the rule or standard provides value for five groups of people:

In diving, there are very few absolute rules, rules that if broken will ALWAYS get you into physical harm, even if they get you into legal harm when no physical harm has occurred. A human factors researcher, Denham Phipps, studied anaesthetists to better understand why anaesthetists broken rules and wrote this paper – ‘Identifying violation-provoking conditions in a healthcare setting’ which I believe has utility in the diving space. (If you want a copy, drop me a message via the contact form at the top). 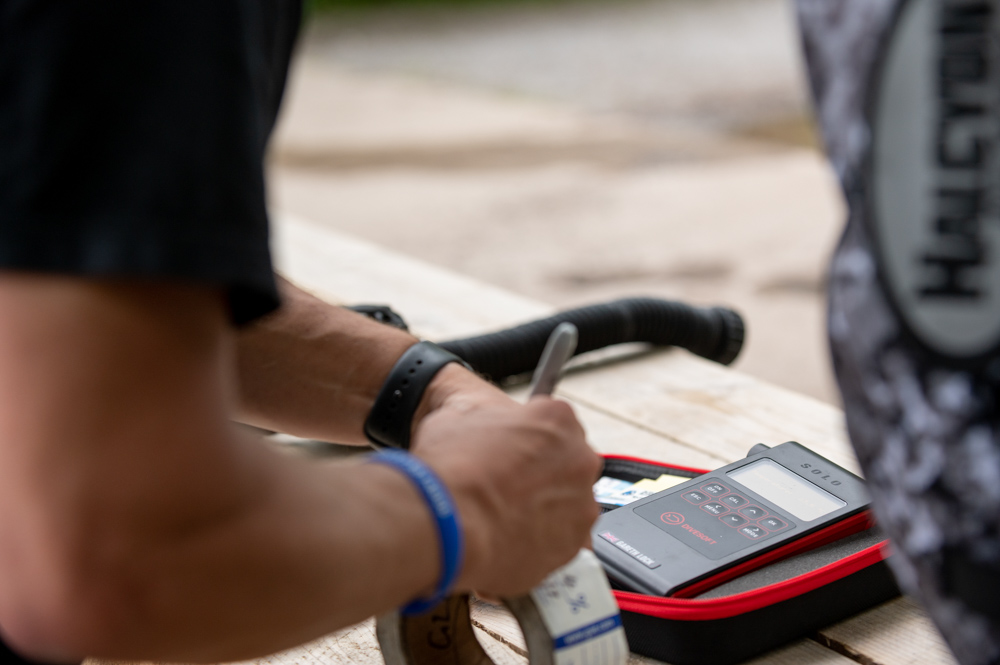 A violation is often defined as a deliberate act that deviates from standard protocols or practices, and this is different to a ‘human error’ which is seen as an unintended deviation e.g., a slip, a lapse, or a mistake. However, it might be that the rule or standard prevents normal operations from taking place as they should e.g., the commercial situation means that taking four divers on a Discover SCUBA diver dive with a single instructor when they are supposed to maintain ‘direct’ control of all the divers is the only way to generate enough revenue. Fundamentally, how do you maintain ‘direct control’ if you have two hands and four clients and one of them decides to bolt to the surface?!

Returning to Phipp’s paper on violations, the important thing to recognise straight away is the use of ‘provoking conditions’ in the title. Anaesthetists are professionals. They are highly trained. They literally have people’s lives in their hands. They know what should be done, when and why. They are also subject to many operational and environmental conditions that make it harder to follow the rules, especially if they don’t appear to add value to them, to the patient or to the wider organisational goals. Phipps highlighted three key themes associated with conditions which would provoke rule-breaking. I have no doubt that there are many parallels between diving and this environment, although no work has been done in this area as far as I know.

The paper provides multiple examples taken from interviews with anaesthetists. I have created some similar examples under each of these topics to give you an idea of what these might be as they relate to diving. 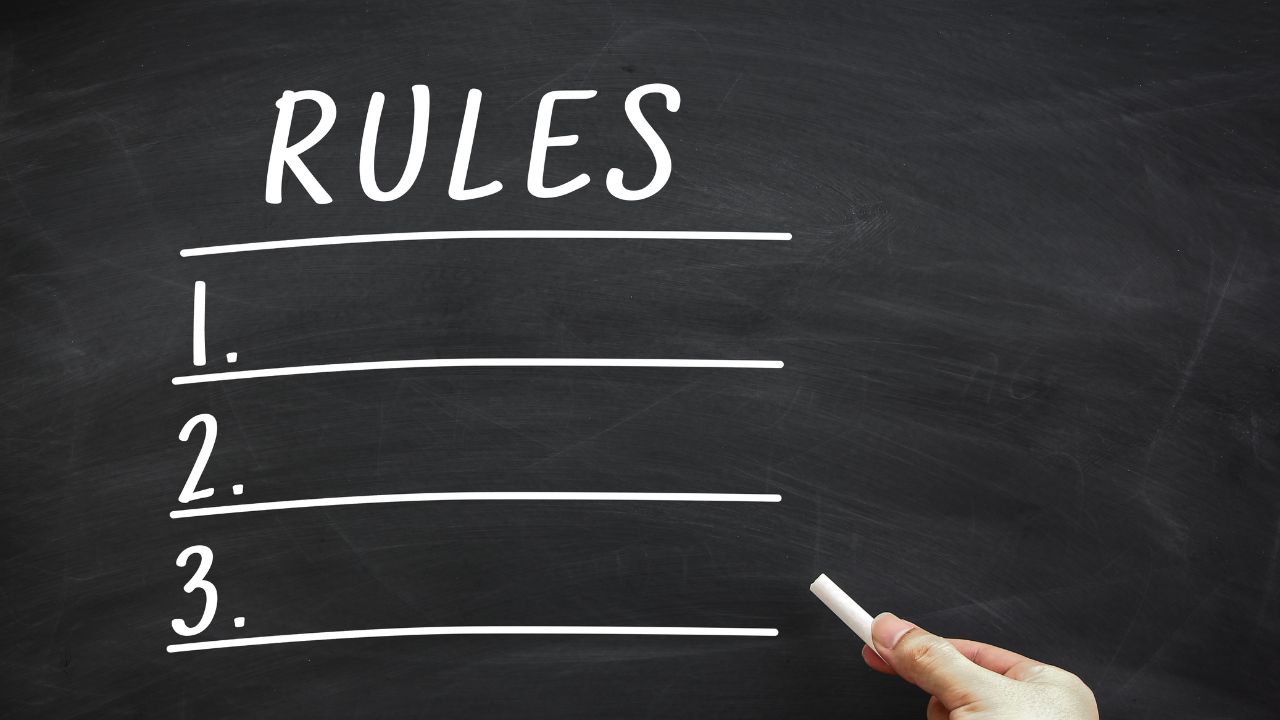 The research shows that most engineering-based organisations believe that safety is best achieved through following rules and processes, and expected behaviours. However, because of our unique ability to adapt our actions to suit the local conditions and demands, safety in a dynamic and uncertain environment can be maintained because workers do not explicitly follow the rules or processes. Instead, they interpret the rules and standards, adapting their resources to maximise effect, developing workarounds, and inventing in situ many of the routines that ultimately come to make up the procedures that are used by the organisation. Many organisations possess an illusion of safety because they believe these rules will be followed and this creates safety - an exception to this is pilot training where pilots are routinely trained to question the validity of the protocols that they have to follow and or break (Silbey, 2009). 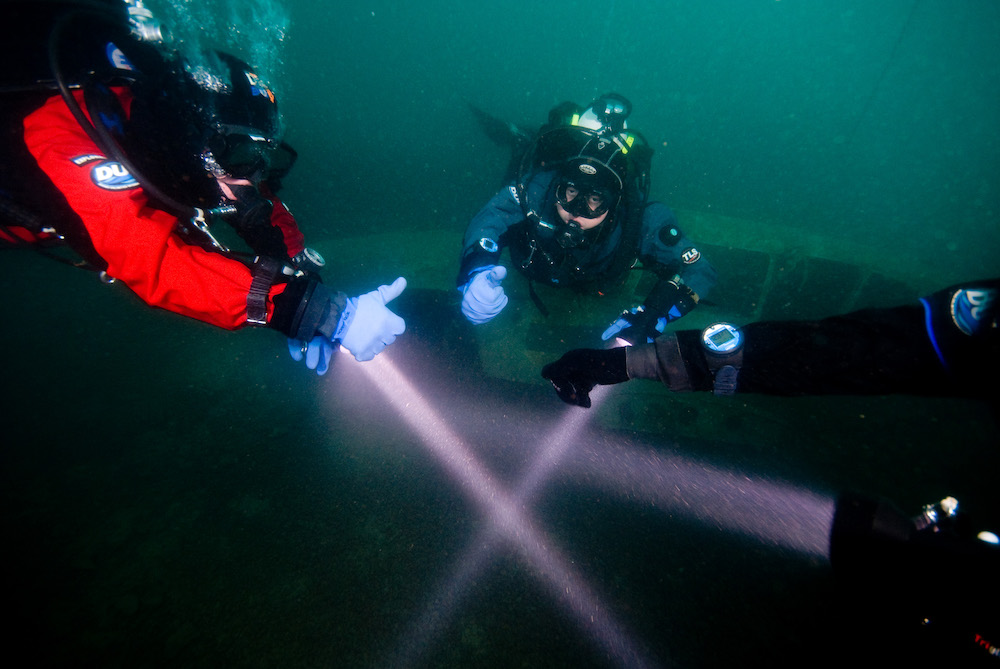 These three all relate to how the diver/instructor perceives the risk and what their level of risk tolerance is. There is a paradox here. The more experienced we are, the more we subconsciously see as a threat, at the same time, we spend less time undertaking active engagement with the task or environment because we know what to do. Some call this complacency (when something goes wrong), but when it goes right, we call it efficiency when the same actions go right!

The Organisational or Situational Factors 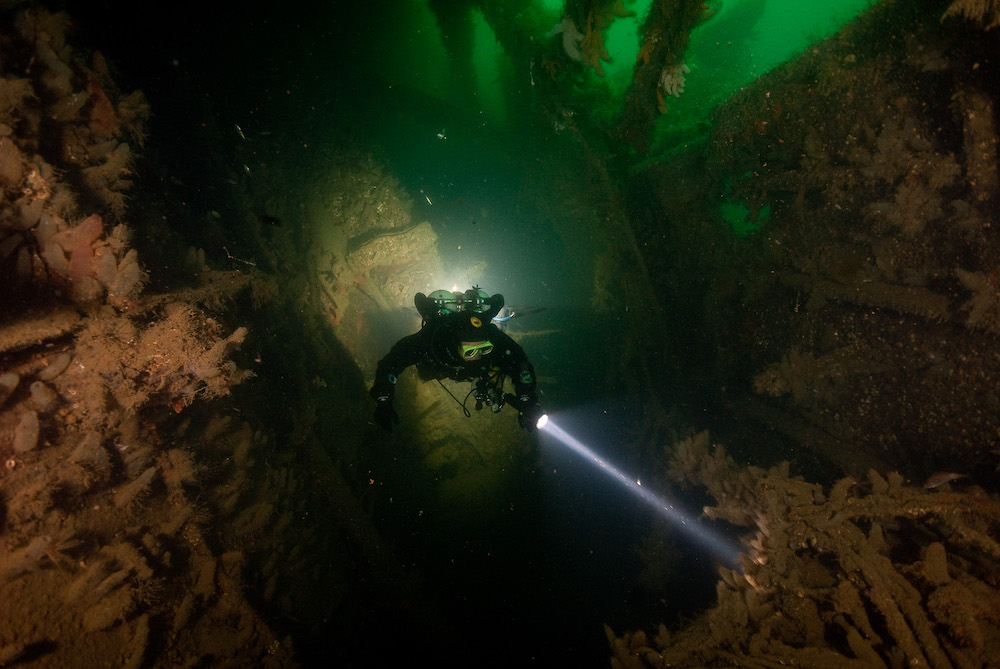 As you can see, these themes don’t necessarily exist in isolation and there is some overlap between them. This is to be expected given the variety of how instructors are developed, how they currently teach, the operational and social environment they are in, the agencies they teach for, and the students they teach. The key thing to recognise is that themes are part of the conditions, the context, in which diving is taking place.

Context is something we rarely look at when it comes to learning from unintended outcomes because it is hard to do, and it requires a Just Culture to expose the deviations that makeup ‘normal’. Proximal causes are easy to spot, and latent issues like those conditions identified above, are not so. Yet it is the conditions that drive behaviours. Accident investigations and follow-ups should look at the 'extent of conditions' - how prevalent are these conditions in your operations? 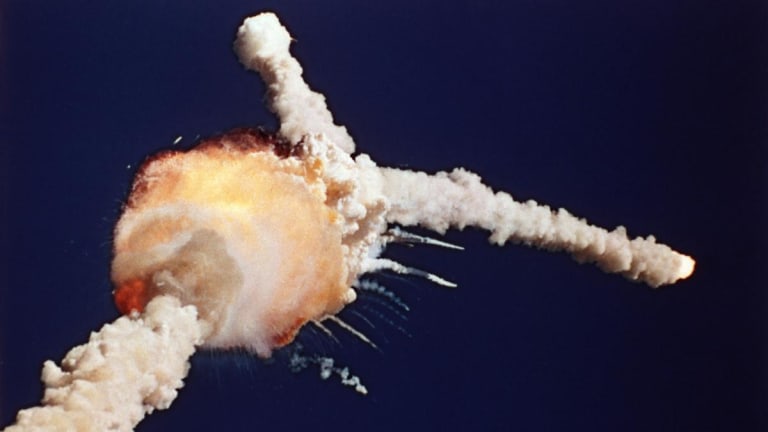 The Social Acceptance of Deviation

This brings me to the final part of this blog and it is a lead-in for a much longer piece I am writing on the ‘Normalisation of Deviance”. The term "Normalisation of Deviance" came from the work of Diane Vaughan following the loss of Challenger in 1986. Contrary to popular media, the 'Normalisation of Deviance' is not about the continued breaking of rules or standards, it is the social acceptance that risks being taken are socially accepted and therefore the behaviour is not considered deviant.

“In 1992, after six years analyzing the history of launch decision making in the years before the Challenger launch, I had found no evidence of rule violation and misconduct by individuals. Instead, the key to accepting risk in the past was what I called “the normalization of deviance”… The normalization of deviance was a product of NASA’s organizational system: the connection between environment, organization, and individual interpretation, meaning, and action… launch. The decision was not explained by amoral, calculating managers who violated rules in pursuit of organizational goals, but was a mistake based on conformity—conformity to cultural beliefs, organizational rules and norms, and NASA’s bureaucratic, political, and technical culture.”

Deviance is a social construct, not a technical one. That means the baselines we set and the deviations we take are part of the social and cultural aspects of our diving – we don’t believe we are doing something unsafe otherwise our peers would say something - this includes agencies acting 'unsafely' too! To understand how deviation happens, we have to take a bigger look at things and see how it has become socially acceptable to undertake certain activities which others would consider unsafe. This social construction will be the point of the longer blog which will be published soon.

Accidents happen as deviations from normal, not necessarily deviations from the rules. The rules might be the norm, but there is no way the rules can match the reality and so there are always gaps between ‘Work as Imagined’ (rules, process, procedures, standards etc) and ‘Work as Done’ (what really happens given the goals, conflicts and constraints faced).

If you want to reduce the prevalence of rule-breaking, look to understand why the rules are being broken, i.e., the social, technical, and cultural conditions in which the operations are taking place. Move from focusing on the individual to the wider system, because the current system is broken. There are potentially a large number of divers who have never had the reasons behind rules explained. As such, they break rules they don’t know exist.

A Just Culture is about supporting the ability to tell context-rich stories about how it made sense to do what you did, even if that meant breaking the rules.

Importantly, punishing someone (via disciplinary means or via social media) without understanding the context is unlikely to make a difference to others’ behaviours if the conditions surrounding the diving haven’t changed e.g., time pressures, inadequate standards checking, fast progress through instructor training, lack of psychological safety… Saying that punishing someone sets an example so others won’t deviate is a fallacy because if the reward is greater than the risk of getting caught and the subsequent punishment, the rule will continue to be broken.

Address the system, not ‘fix’ the individual.